EPL: Brighton come from behind to draw at Liverpool 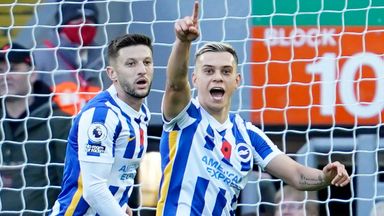 Brighton came from two goals down to secure a deserved point and deny Liverpool victory in an incident-packed game at Anfield.

Captain Jordan Henderson fired the Reds ahead from 18 yards moments after Alisson had denied Solly March at the other end following Leandro Trossard’s defence-splitting pass.

Yves Bissouma, making his first start since 19 September after recovering from a knee injury, then had an effort tipped on to the post before Sadio Mane headed Liverpool into a 2-0 lead after a cross by Alex Oxlade-Chamberlain, on for the injured Naby Keita.

Graham Potter’s side were impressive and they equalised when Trossard slotted home after an assist by former Liverpool player Adam Lallana.

In an entertaining game, Mane and Mohamed Salah both found the back of the net either side of half-time, but both attempts were ruled out for handball and offside respectively.

In a tense finale, Brighton thought they had won it when Trossard scored in front of The Kop, but it was ruled out for offside.