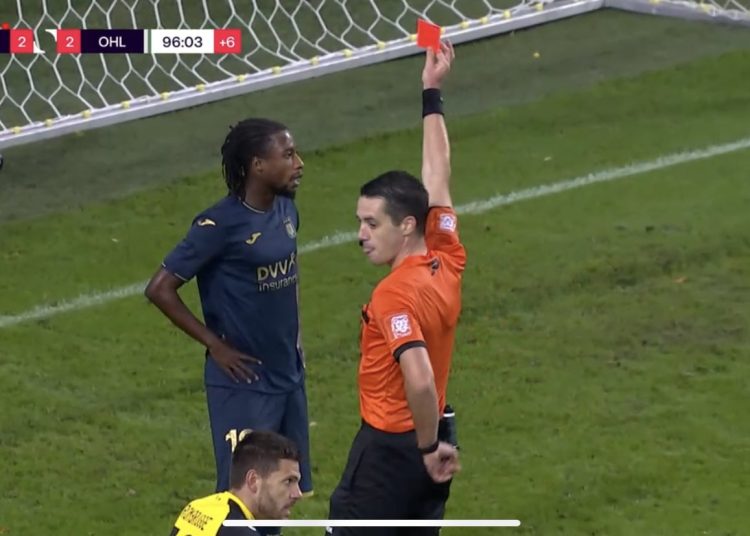 Ghana’s Majeed Ashimeru pulled a leaf out of the Luiz Suarez handbook, when he was sent off for deliberately stopping a goal bound effort with his hand in Anderlecht’s dramatic 2-2 draw with Oud-Hervelee Leuven.

After clawing back to draw level at 2-2, 10-man Anderlecht looked to have lost the game at the death, but Ashimeru stuck out his hand to prevent Leuven’s goal bound effort, resulting in a straight red card for Ashrimeru and a penalty to Leuven.

However, Guinean forward, Sory Kaba, saw his effort saved by Anderlecht goalkeeper Van Crombrugge, in what was the last kick of the game which ended 2-2 with Anderlecht finishing the game with nine men.

Ashimeru off for handling on the line in the 95th minute and OHL with a chance to win it from the spot through Sory and saved by Van Crombrugge. 2-2 FT in an amazing crazy game where Anderlecht finished with nine men. #andohl #JPL pic.twitter.com/zg37jBQeEf

Ashimeru is likely to face further action for his unsportsmanlike conduct, but his ‘heroics’ have sat well with Anderlecht fans, while also drawing comparison with Luiz Suarez, whose similar antics for Uruguay famously denied Ghana a place at the 2010 World Cup semifinals.