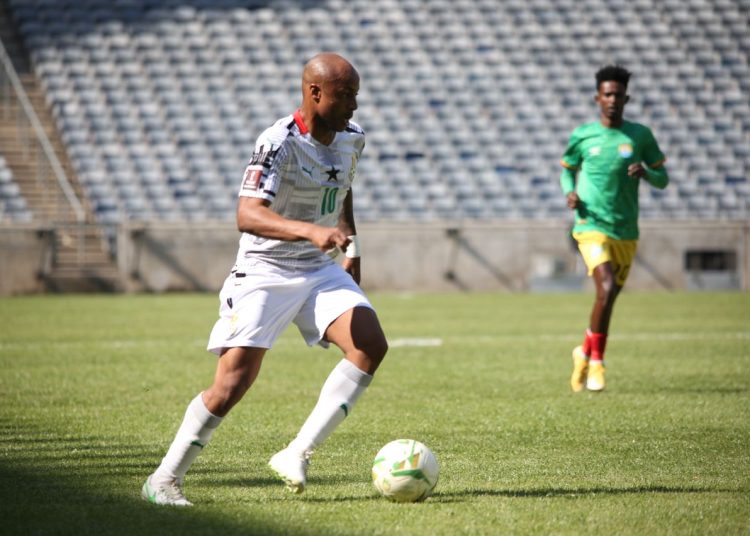 Black Stars captain, Andre Ayew has reached 100 caps for Ghana after being named in starting eleven to face South Africa in the 2022 FIFA World Cup qualifiers.

His 100th cap puts him second, only behind Ghana forward Asamoah Gyan, who was capped 109 times in career that spans almost two decades.

The Al Sadd forward has scored 21 goals in the process for Ghana making him the fifth highest scoring player, behind Karim Abdul Razak (25), Kwasi Owusu (36), Edward Acquah (45) and Asamoah Gyan (51).

Ayew, 31 has been with the Black Stars for 14 years since his debut under Claude Le Roy and has been coached by eight different coaches during his time serving Ghana.

The U-20 World Cup winning captain made his Ghana debut at the age of 17 when he replaced Haminu Dramani in Ghana’s 1-1 draw with Senegal at The New Den in London on August 7, 2007.

The 17-year-old subsequently became a member of Claude Le Roy’s team for the Africa Cup of Nations in 2008 hosted in Ghana where he made three group stage appearances.

Ayew then went to represent the Black Satellites, leading the U-20 boys to continental and global glory.

He played a key role in Ghana qualifying for the 2010 World Cup in South Africa.

Noted for his skill and passion for Ghana, he has represented the country at sixth Africa Cup of Nations tournaments and two FIFA World Cups.