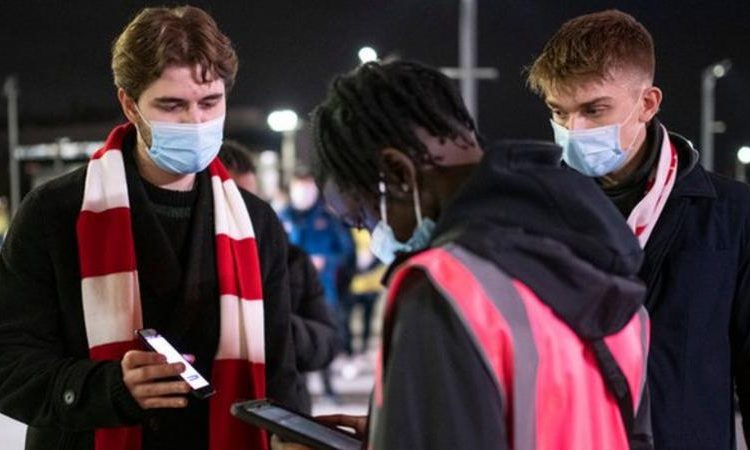 Fans have had to use a Covid-19 pass in order to attend fixtures in recent weeks (Image credit: Getty Images)

The league’s 20 clubs met on Monday to discuss how they could deal with the challenges faced after six fixtures were postponed because of Covid-19 numbers over the weekend.

The postponement of a round of games over Christmas was a possibility.

No vote took place and so two rounds of fixtures are in place across five days from 26 December.

It had been expected that gameweek 20, starting on 28 December, would be postponed in order to ease the pressure on Premier League squads.

Instead, clubs have been advised if they have 13 fit players, plus a goalkeeper, they should fulfil their games.

FA Cup replays in rounds three and four have however been scrapped and talks are ongoing on whether to reduce EFL Cup semi-final ties to one-leg matches.

Last week, Premier League players returned 42 positive Covid-19 tests in a seven-day period, the highest number since the start of the pandemic. Updated figures for the most recent seven-day period are expected later on Monday.

In Sunday’s Premier League fixtures, Chelsea named just six substitutes for their draw at Wolves and Liverpool drew at Tottenham without a number of first-team names.

Five of Saturday’s six fixtures were called off. Chelsea tried to get Sunday’s fixture at Wolves postponed and boss Thomas Tuchel said his players were put at “huge risk… not just because of Covid but also physically”.

It is understood Liverpool were among a group of clubs who pushed for the postponement of gameweek 20.

After Sunday’s draw at Spurs, Liverpool manager Jurgen Klopp said playing on 26 and 28 December was not feasible.

“It’s impossible, we don’t have the players,” Klopp said. “We have to think we will get an extra case or two. We cannot just push it all through. The 26th and 28th, that’s not possible. We would prefer to play but we need help with the fixtures.”

The seven Premier League teams still in the Carabao Cup face ties on 21 and 22 December and will play three Premier League fixtures between then and 2 January.