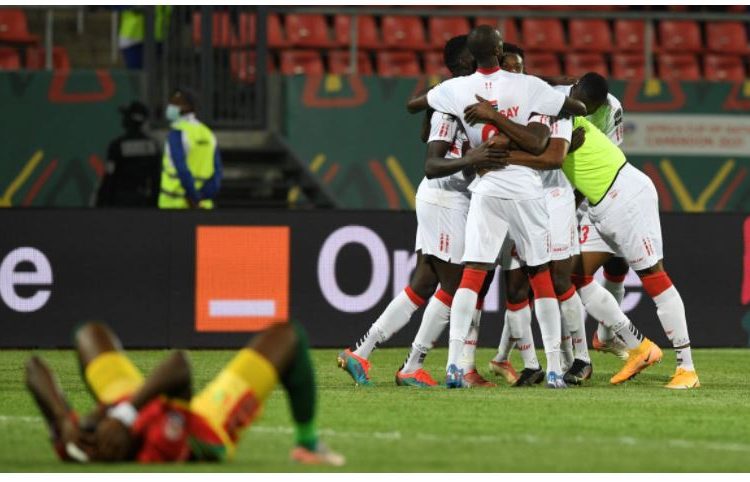 Musa Barrow’s strike in the second half gave Gambia a historic 1-0 win over Guinea to qualify for the quarterfinals of the TotalEnergies Africa Cup of Nations at the Stade Omnisports de Bafoussam on Monday.

The Scorpions continue to send shockwaves in their debut appearance at the Africa Cup of Nations and are without a loss in the competition so far.

The Syli Nationale were without influential skipper Naby Keita who is serving a suspension while Gambia made some last minute changes to their original starting line up after three players Ibou Touray together with Noah Sonko and Saidy Janko, pulled out of the match due to illness.

Modou Barrow and Musa Barrow were expected to be in involved in the attack for the Scorpions and try to get the goals.

The were very few clear cut chances in the first half .Guinea had a half chance right at the start of the half. Mohamed Bayo could not connect well with the ball as it fell to him in the six yard area from a corner. His attempted shot was way to high.

The second period was identical to the first with both sides trying to fashion an opening.

Gambia suffered an injury blow with their star player Ablie Jallow being withdrawn from the field of play. He was replaced by Ebrima Colley.

The two coaches were desperately hoping to wrap up the match in regulation time to avoid extra time and penalties.

But it was the Scorpions who drew first blood 20 minutes from time with Musa Barrow who found space in the Guinea defense to calmly slot the ball past keeper Aly Keita.

Gambia held on to claim anther stunning victory to progress to the quarterfinals.