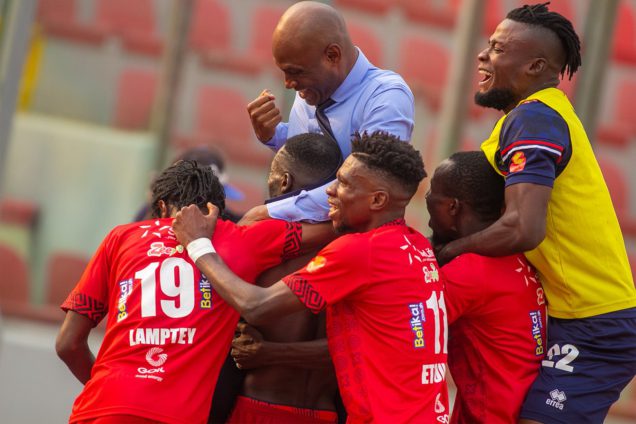 Kumasi Asante Kotoko beat Medeama 1-0 at the Baba Yara Sports Stadium on Sunday to extend their lead at the summit of the Ghana Premier League log.

The Porcupine Warriors went into the game with a three point lead on the log.

George Mfegue scored in the 78th minute to secure victory for his side, extending their lead at the top to six points.

Meanwhile, Defending Champions, Accra Hearts of Oak succumbed to a late 1-0 defeat at the hands of Karela United at the Crosby Awuah Memorial Park on Saturday afternoon.

Umar Bashiru scored in added time to hand all three points to the home side who are without a defeat in their last four Ghana Premier League games.

Elsewhere, Accra Lions lost 1-0 at home to Ashanti Gold on Saturday, via a goal from Yaw Annor.

The games between Bechem United and WAFA and Elmina Sharks vs Berekum Chelsea all ended in goalless draws on Sunday afternoon.

Bibiani Gold Stars came from a goal down to defeat Legon Cities 2-1 at the Dun’s Park on Sunday.

Osman Amadu gave the visitors the lead in added time of the first-half, before Emmanuel Appau equalised for the home side in the 70th minute.

However, an own goal from Francis Addo in the 78th minute gave Bibiani Gold Stars all three points.

Dreams FC will host Aduana Stars at the Theatre of Dreams on Monday at 3pm.