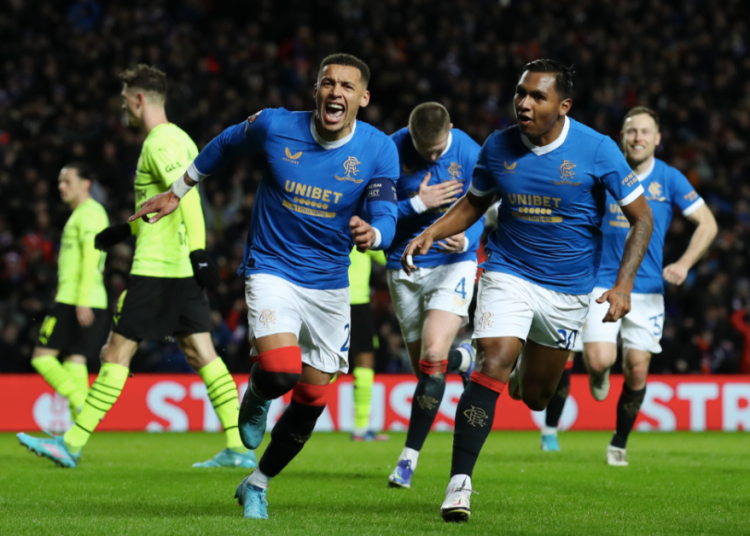 Jude Bellingham starred, but Borussia Dortmund were unable to produce a comeback as Rangers sealed a famous Europa League round of 32 victories (6-4 aggregate) over the German giants.

After defeating the Bundesliga side 4-2 last week, James Tavernier struck twice to stop Dortmund in their tracks as the two clubs battled at a pulsating 2-2 draw at Ibrox.

Gers skipper Tavernier scored from the spot in the 22nd minute, but goals from England international Bellingham on the half-hour mark and striker Donyell Malan had the super-charged Bundesliga visitors ahead at the interval.

Tavernier turned anxiety back to joy when he levelled in the 57th minute and Rangers tightened up in the nervy second half where Ryan Kent had a ‘goal’ chopped off through VAR but at the end of a frenetic night, the Light Blues fans celebrated one of the finest European outcomes in the club’s history.

It was all set up for one of the great Euro nights in Govan, but there was always the chance of things going wrong, given the level of opposition.

Dortmund went into the game on the back of a morale-boosting 6-0 win over Borussia Mönchengladbach on Sunday, but star striker Erling Haaland was again missing with an abductor problem.

From the side which lost in the first leg, Emre Can, Thomas Meunier, Nico Schulz and Thorgan Hazard came back in while Giovanni Van Bronckhorst named the same Gers team that started in Dortmund.