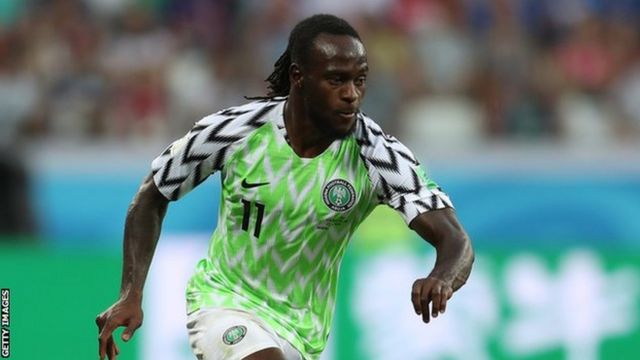 Nigeria Coach, Augustine Eguavoen says he wants to persuade former Chelsea winger, Victor Moses to return to International Football in the near future.

The 31-year old who now plays for Spartak Moscow, retired from international football following the Super Eagles exit from the 2018 FIFA World Cup in Russia.

The Nigeria Football Federation ( NFF) made several attempts to get Moses to rescind his decision but to no avail.

Eguavoen who took charge of the team for the 2021 AFCON in Cameroon and will lead them to the World Cup play-off double header against Ghana, believes Moses is a very important player that the team will need in future.

“Victor Moses is somebody I adore and I’m looking at ways of trying to get him in and we’ve spoken.

“He’s not part of these games [World Cup play-off against Ghana] but hopefully as time goes on because we want the best for the team.

“Whether we like it or not, Victor Moses will still bring some value. But right now he is playing in Russia, we all know the problems with Ukraine and Russia. I am happy to say that my conversation with him is settled.”

The first leg of the playoffs against Ghana will take place on March 25 in Cape Coast, while the reverse fixture will hold at the Moshood Abiola Stadium in Abuja four days later.