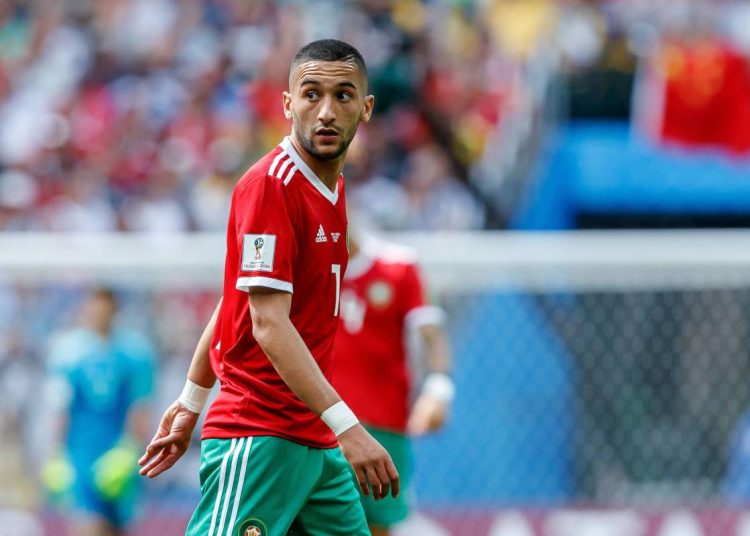 Chelsea winger Hakim Ziyech has rejected the chance to play for Morocco in their 2022 World Cup play-off against DR Congo later this month.

The 28-year-old, who has not played for the Atlas Lions since June 2021, announced his decision to quit international football last month after a falling-out with Morocco coach Vahid Halilhodzic.

But Morocco football federation (FRMF) president Fouzi Lekjaa revealed to local media that Ziyech and Ajax defender Noussair Mazraoui, another player involved in a dispute with Halilhodzic, were both included in Morocco’s preliminary squad for the two-legged tie.

However, Ziyech explained why he will not be returning to play for his country again amid continued “misinformation” about his commitment to the North Africans.

“I love my country and playing for the national team has been the honour of my lifetime, so it is with great sadness that I must announce that although the FRMF president confirmed that I will be pre-selected for the team I won’t be returning to play for Morocco,” he wrote on Instagram.

“I’m sorry to disappoint the fans, this was not an easy decision to make, but sadly I feel I have no other choice.”

Long-term absentee Mazraoui, who last played for Morocco in November 2020, also announced on social media that he will not be honouring his call-up for the two games.

“For a year and a half I have not been called up to the national team, without reason or explanation,” he said.

“So it is with a broken heart that I have decided not to play for the national team during the next selection. I wish the best to the whole team and I hope to see you again in the future.”

Since featuring against Ghana and Burkina Faso last June, Ziyech has been involved in a war of words with Bosnian Halilhodzic regarding his availability for international duty.

The former Ajax man missed all six group-stage fixtures in Morocco’s World Cup qualifying campaign, and Halilhodzic criticised the player’s commitment after Morocco, who are looking to qualify for a second successive World Cup, exited this year’s Africa Cup of Nations in the quarter-finals without Ziyech.

“Despite giving my all to the team over the past six years and supporting them my entire life, the leadership continue to release misinformation about me and my commitment to my country,” Ziyech added.

“Their actions have made it impossible for me to continue to be part of the team. I learned the news about the pre-selection at the same time as everyone else, so I’m releasing this statement to ensure that you hear the truth directly from me.

“Thank you to everyone who has supported me, I wish the team nothing but the best for the future. My focus as a player is at my club Chelsea.”

A Champions League and Club World Cup winner with Chelsea, Ziyech has scored seven goals and provided five assists for the Blues in 30 appearances this season.

He was born in the Netherlands and represented them at youth international level, but switched allegiance to Morocco in 2015.

He won 39 caps for the North Africans and scored 17 goals.

Morocco travel to DR Congo on 25 March, with the return leg on 29 March. The winners of the tie will book a spot at the World Cup finals, which will be held in Qatar later this year.