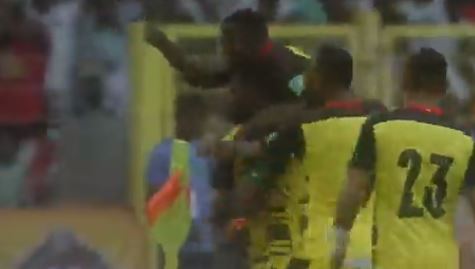 Black Stars captain, Thomas Partey scored an important goal to give Ghana the lead against the Super Eagles of Nigeria.

Despite the best efforts of the crowd at the stadium in Abuja to unsettle the Ghanaian players in the early stages of the game, it was the Black Stars who grabbed a crucial opener.

After some good hold-up play from Jordan Ayew, Gideon Mensah’s pass found Thomas on the edge of the Nigerian box.

The Arsenal midfielder’s powerful effort went straight through Super Eagles goalie Uzoho and into the back of the net sparking wild celebrations from the away side.

Thomas Partey sneaks one under the keeper! Black Stars have a goal in Abuja 🇬🇭

Nigeria, however, found an equaliser when Denis Odoi was adjudged to have brought down Ademola Lookman in the box.

Defender Troost-Ekong stepped up and found the net from the spot.