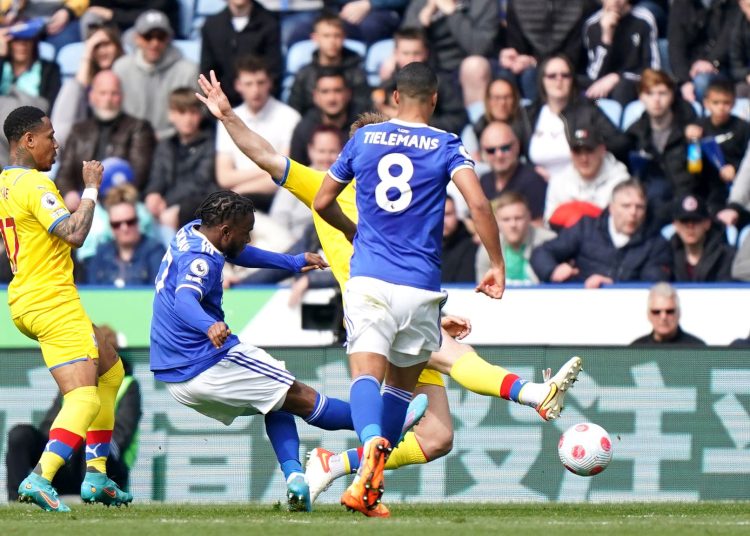 Wilfried Zaha pulled one back for the visitors in the second half, but Brendan Rodgers’ seven changes paid off to move them above Palace and into ninth.

Both sides are focusing on competitions away from the Premier League with Leicester set to take on PSV in their Europa Conference League second leg on Thursday, while the Eagles are going to Wembley on Sunday in the FA Cup semi-finals against Chelsea.

The Foxes opened the scoring in the 39th minute. Dewsbury-Hall timed his pass into Lookman perfectly and the winger shimmied away from two Palace defenders before shooting past Guaita.

And just six minutes later they were two-up after some more brilliance from Dewsbury-Hall. Marc Guehi made a rare mistake by miscontrolling a ball forward which allowed Daka to gain possession inside the Palace box. He pulled the ball back via a slight deflection off James Maddison for Dewsbury-Hall, who turned away from goal bending a wonderful effort into the top corner.

Palace forced their way back into the game. Jordan Ayew sold Tielemans a step over in the box, and he was brought down with a penalty awarded. Schmeichel saved Zaha’s spot-kick low to his left but it had to be retaken due to encroachment. The Leicester goalkeeper saved again, this time from a penalty down the middle, although the rebound came out perfectly for Zaha to head into the net.

Palace pushed for an equaliser in the final stages as Jeffrey Schlupp went close with a flick at goal, but Leicester held on.