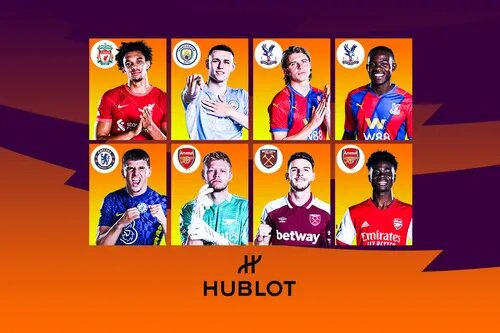 Eight players have been nominated for the 2021/22 Hublot Young Player of the Season award, and you can help decide who wins.

The fans can have their say by voting below for their favourite player aged 23 or younger at the start of the campaign by 18:00 BST on Monday 16 May.

The Liverpool right-back has contributed at both ends of the pitch, dominating the right flank for the second-best defence in 2021/22, as well as scoring two goals and setting up 12 more, the second-most of all players.

Last term’s Hublot Young Player of the Season has already matched his total of nine goals and five assists from 2020/21, playing an important role for league leaders Manchester City. Only two City forward players have featured for more minutes than the 21-year-old, who has earned Pep Guardiola’s trust for every occasion.

The Crystal Palace star, on loan from Chelsea, has been one of the league’s best box-to-box midfielders, taking his game to new heights after suffering relegation with West Bromwich Albion last season.

The 22-year-old has made more tackles than any defender this season, proving so hard to beat for even the brightest Premier League wingers.

With 11 goals and 10 assists, 23-year-old Mount has become the youngest player to reach double figures for both in a Premier League campaign for Chelsea, following in the footsteps of club legends in Frank Lampard, Didier Drogba, Juan Mata and Eden Hazard.

The summer signing has kept 12 clean sheets in 31 matches. Some of his 86 saves have been unbelievable stops, including perhaps one of the best in Premier League history to keep out James Maddison’s free-kick at Leicester City.

West Ham United’s midfield general has gone from strength to strength this season. He has made the third-most passes and second-most interceptions among midfielders, as well as leading the way for dribbles in a campaign where he has polished his attacking play.

At the age of just 20, Saka has led the charge for an Arsenal team chasing a top-four finish for the first time since 2015/16. He has 11 goals, six assists and has shown great character to bounce back after suffering penalty-shootout heartbreak in last summer’s European Championship final.