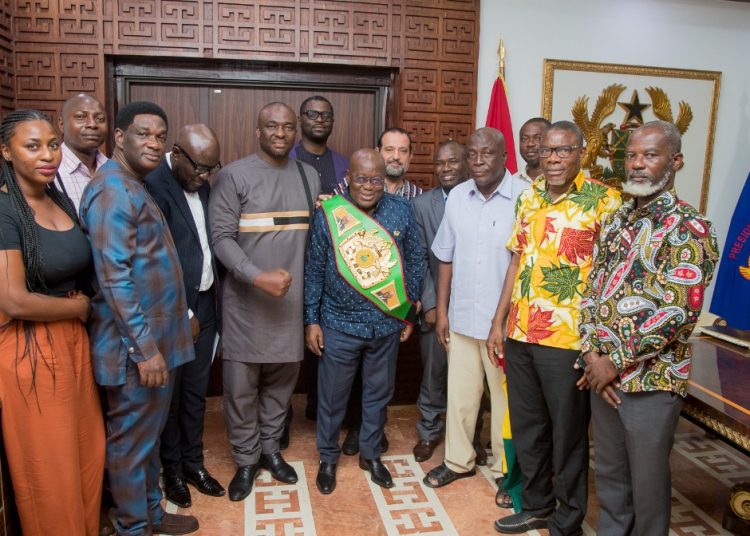 A delegation from the Ghana Boxing Authority (GBA) and their media Partners Imax Media Group paid a curtesy call on The President of the Republic of Ghana, His Excel. Pres. Nana Addo Danquah Akufo Addo at the Jubilee House.

The delegation, comprising of six members of the Authority’s Executiveboard members and two Directors from their partners Imax Media Group,was jointly led by the Leader of the GBA, Mr. Abraham Kotei Neequaye.

Welcoming the delegation to the Jubilee House, the Deputy Minister of Sports Mr. Evan Owusu Bobie intoned the importance of boxing as one of the national sporting disciplines which has over the years won global recognition and laurels for Ghana both at the amateur and professional levels.

The GBA leader informed the President of the Republic that his new administration has been in office for only six (6) months, during which they have been able to organise a new flagship tournament dubbed, ‘The De–Luxy Professional Boxing League’ in partnership with Imax Media Group.

He further informed the President about Professional Boxing League which is currently being staged at the Accra Bukom Boxing Arena, and the need for the tournament to be supported with logistics to enable the tournament travel across the length and breadth of the whole country to unearth more talents forthe sports of boxing. He therefore appealed to the Presidency for support in order for the league to be staged in other parts of the country.

In his response, Pres. Nana Addo Danquah Akufo Addo expressed his excitement about the revival of boxing in Ghana and commended the GBA and Imax Media for their bold initiative to develop the juvenile, amateurs to the professional boxing in Ghana.

The President further enquired about the format of the nouvelle boxing league and was informed by Mr. Neequaye on the modality and technicalmechanics of the League. He informed President that the competition is staged between 12 selected boxing gymnasiums in Accra.

The President of the Land further enquired as to what is being done for the boxing trainers in the ongoing league, for which the Leader of GBA explained that plans are in place to organise boxing training clinics and workshops with experts invited to train our local Ghanaian coaches in the modern boxing trends.

On behalf of The CEO of Imax Media Group, Mr. Maxwell Techie, who is unable to join for this visit, Mr. Fadi Fattal Group Director expressed Imax Media appreciation to the President for his warm reception of the GBA and Imax Media Delegation.

Mr. Fadi Fattal informed the President that Imax Media is investing approximately $1.700,000 over a 5 year’s period. The package of investmentcovers the staging of twenty (20) bi-weekly Fight Nights annually which will culminate into the penultimate Presidential Fight Night on the 26th of December Boxing Day every year to crown the entire boxing league season.

Mr. Fattal also mentioned the eventual signing of the best boxers from the ongoing boxing league to the Imax Boxing Promotion brand to fast track their professional development into world boxing rankings and title fights.

He added The President was also briefed about the introduction of Intra-Ghana National Security Boxing Tournament during the De-Luxy Fight Nights. The security agencies to participate in this tournament comprises of the Army, Police, Prisons, Fire Service, Immigration and Customs services, which will culminate into a Presidential Fight Night Belt to crown the entire boxing league season which is to be held on the 26th of December (Boxing Day) every year and thanked the title sponsor Hexagon Industries Limited manufacturers of DE-LUXY quality Paint and Premium Motors who on their part giving 2 Brand New Renault  KWID cars for the best Gym and the best Boxer of the League along other supporting sponsors Tecno Ghana, TCL Home appliances, Imax Electronics and MaxBuy.

The President further tasked the Ministry of Youth and Sports to hold further discussion with the GBA and Imax Media on the issues relating to the Presidential Fight Night Belt.

The President of the Ghana Boxing Authority Acknowledge President Akufo Addo as one of their own and decorated him with a symbolic title belt during the visit.

In accepting the gesture of the boxing delegation, President Akufo Addo thank the delegation for their kind gesture and promised to provide logistical support to the effort of Ghana Boxing Authority and its partner Imax Media Group are making and also thanked them for joining hands to do such a great project for the boxing in Ghana. He finally advised the partners to deal transparently and openly with each other in order to grow boxing all over again.

Also present at the meeting was the Chief of Staff Mrs. Akosua Frema Osei-Opare, The Executive Secretary to the President Mr. Nana Bediatuo Asante and The CEO of National Sports Authority Prof. Peter Twumasi.