The Ghana League Clubs Association (GHALCA) Executive Council has officially released the list of teams to compete in the “G6” Competition later in August.

The competition involving some of the top six ranked teams in the immediate past Ghana Premier League is scheduled to commence on Wednesday, August 17 at the Accra Stadium.

The launch of the competition took place earlier today at the Association’s Secretariat in Accra with GHALCA Vice President John Ansah present at the event.

The top two ranked teams in each group progress to the next level with the winner of Group A taking on the second ranked team in Group B and vice versa.

Reigning Ghana Premier League Champions Kumasi Asante Kotoko was eligible to compete in the tournament but decided to pull out of the competition to embark on a preseason tour in Turkey. 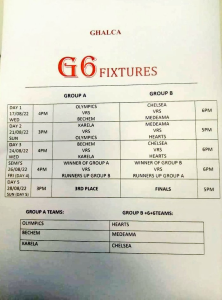