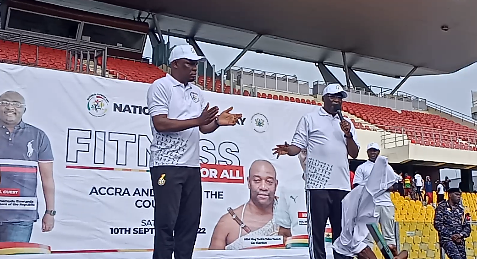 Dr. Bawumia heaped praise on the Sports Minister in his address earlier today following the conclusion of the exercise held at the Accra Sports Stadium.

The National Fitness Day is an initiative launched by the Vice President to urge Ghanaians to adopt healthy lifestyles which “means better health which really means better productivity”.

After witnessing a large turnout at the event that had representation from several keep fit clubs, students and sports enthusiasts, Dr. Bawumia expressed his satisfaction with Sports Minister Ussif for pulling the maiden edition off.

“Today I really have to thank the Minister for Youth and Sports for this execution which is brilliant” the Vice President stated in his address.

On his part, the Sports Minister added the main point of call for observing the exercise will change by stating “we will be rotating from one region to another across the country.”

The National Fitness Day is to be held on the second Saturday every month and the program is to be held across communities in Ghana.