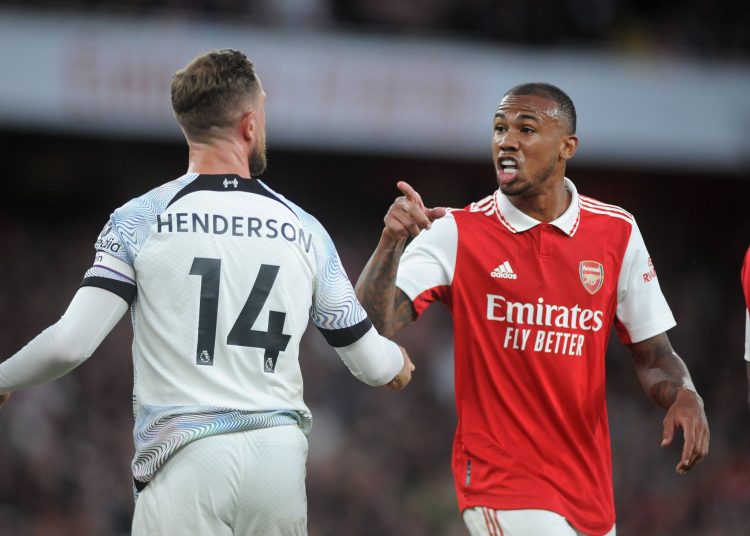 The Football Association is looking into an incident between Arsenal and Liverpool players during Sunday’s Premier League clash.

An enthralling contest at the Emirates Stadium on Sunday saw the Gunners run out 3-2 winners, however, tensions boiled over late in the second half.

A number of players were involved in a heated argument on the pitch, with Arsenal defender Gabriel Magalhaes seen squaring up to Reds captain Jordan Henderson before gesturing towards referee Michael Oliver.

Oliver spoke to managers Mikel Arteta and Jurgen Klopp following the incident and they both had another conversation with Oliver after the match.

The FA said in a statement: “We are aware of an incident that took place during the match between Arsenal and Liverpool.

“We are in dialogue with the match officials and will review the details of the incident.”

Klopp said afterwards he was ‘not allowed’ to divulge any more details of the conversation with Oliver, while Arteta told a press conference afterwards: “It was an incident that happened. Whatever happens on that pitch stays on that pitch.”

Arteta’s side restored their place at the top of the Premier League as Gabriel Martinelli’s early strike, plus two goals from Bukayo Saka saw them collect the three points.

Smalling, Dybala on target for Roma in win over Lecce

Napoli top Serie A after thumping win over Cremonese

Napoli top Serie A after thumping win over Cremonese