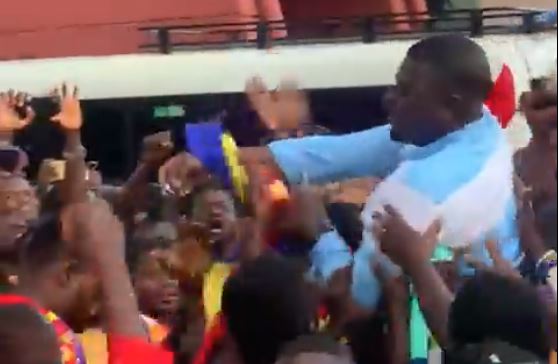 Many Hearts of Oak fans were shocked when the club announced that they had parted ways with head coach, Samuel Boadu.

Boadu won five trophies in just under two years with the Phobians but a tough start to the season saw him fired.

It appears that fans of the Accra club were not too pleased with the firing of the coach and showed it at the Accra Sports Stadium on Stadium.

Boadu was at the stadium on Sunday for the second leg of Hearts’ Confederation Cup tie against AS Bamako and was immediately mobbed by excited fans.

He was hoisted into the air while fans chanted his name.

At this rate, Coach Samuel Boadu's return to Hearts of Oak is imminent . pic.twitter.com/PX0mvRRkCw

The adulation continued into the stadium where fans continued chanting his name as he took his seat.

Hearts won the game 1-0 under newly-appointed assistant coach, David Ocloo but were eliminated 3-1 on aggregate.