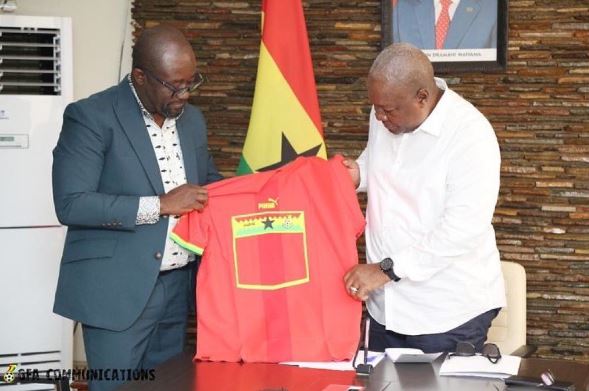 Former President, John Dramani Mahama has commended Kurt Okraku for his leadership of the GFA, which he believes has led to significantly renewed interest in football in Ghana.

Under his tenure, the Ghana Premier League and FA Cup competitions for both men and women have made a return after a couple of years away, the Black Satellites have won an African crown and the Black Stars have qualified for the World Cup.

The FA Boss paid a visit to the former President to present him with Black Stars jerseys as part of efforts to ramp up support for the national team ahead of the 2022 World Cup.

“We know that under this administration, the GFA has brought some more vitality into our football and we are all supporting this administration to make sure we move football to the next level. I know there are challenges in the domestic League because our people are more interested in the foreign League and so people don’t come to the stadium as they should but it is normally good family entertainment, but we need to raise the standard so people will love to come to the stadium,” he said.

The Ghana Premier League returns this weekend after a two-week hiatus after an injunction filed on the league by Ashgold was nullified.