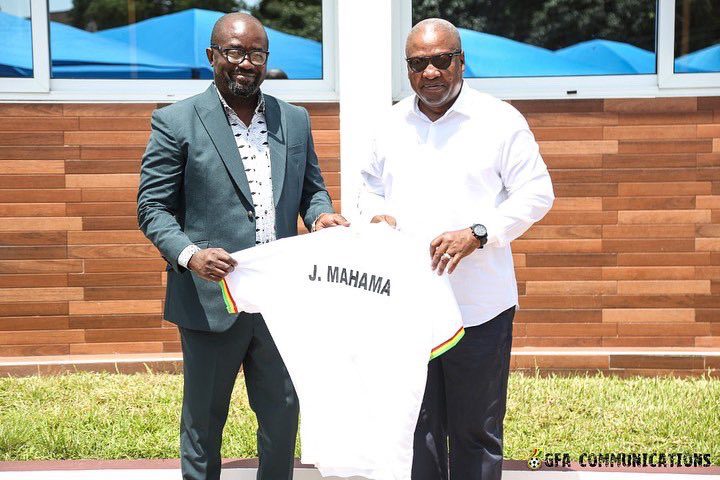 Former President, John Dramani Mahama had urged the head of the Ghana Football Association (GFA), Kurt Okraku, to work towards improving the quality of refereeing in the country.

Refereeing has been a major concern in Ghana football, particularly in the last decade, culminating in a number of officials being indicted for accepting bribes to influence games back in 2018.

Even after the return of football, the standards of refereeing have been constantly criticised.

Officials have often been called out for not controlling games well enough, not being up to speed with rule changes, and missing blatant calls, which sometimes influence the outcome of games.

The FA Boss recently paid a visit to the former President to present him with Black Stars jerseys as part of efforts to ramp up support for the national team ahead of the 2022 World Cup.

Mr. Mahama commended Kurt Okraku for his work so far as GFA President but urged him to work on addressing the quality of refereeing in the country.

“There have been concerns about refereeing and so it depresses the quality of the league but we have faith that you have all that in hand and we will continue to support you,” the former President said.

He also pledged his support to the GFA stating that he was at their disposal for any advice or encouragement.

“My doors are open and if there is anything you think as a former President, I can do to bring in any moral encouragement, don’t hesitate to let me know,” President Mahama added.