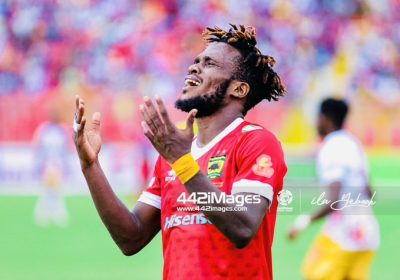 After a frustrating start to the season, Kumasi Asante Kotoko’s Steven Mukwala finally got his goal for the Porcupine Club.

The Ugandan striker scored his debut goal in Kotoko’s 3-0 win over Kumasi King Faisal Football Club in the Kumasi Derby on the resumption of the betPawa Ghana Premier League.

Aside scoring his first goal for his new club, Mukwala was involved in the other goals as he won a penalty kick that led to the second goal and provided an assist for Kotoko’s third goal.

Reacting to fine performance, Mukwala stated on Twitter, “A perfect night in Kumasi , the porcupine Warriors were Amazing…Thank you”.

Mukwala scored the game’s first goal by sweeping in a cross delivered by Dickson Afoakwa from the right side into the net at the far post in the 10th minute.

John Tedeku’s cross from the left side had Mukwala dash into the penalty box in his attempt to make contact but was hacked down inside the penalty box.

Kotoko Captain Richard Boadu scored from the penalty spot in the 28th minute for Kotoko’s second goal and Nicholas Mensah rounded up the game by finishing a sweet build up just after the half time break.

A perfect night in Kumasi 💪, the porcupine Warriors🔴 were Amazing🔥⚽goal to the faithful who believed in the Process . Thank you 🙏 #M9 #AKSC #FabuCensus pic.twitter.com/dNvwKwrVB5

Mukwala set Mensah up to round up a fantastic night for the highly rated import who has been under intense pressure to deliver.