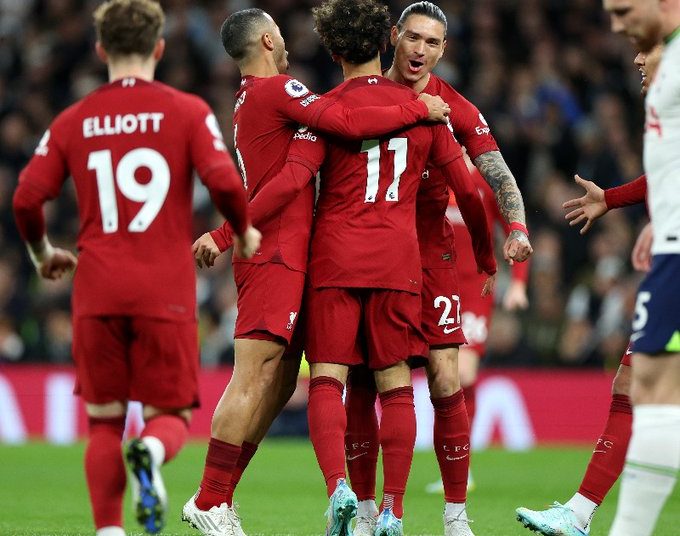 Liverpool held off a late charge from Tottenham after Mohamed Salah struck twice to win 2-1 in north London and lift themselves back into the Premier League top-four race.

Jurgen Klopp’s side had suffered shock defeats to relegation-threatened pair Nottingham Forest and Leeds in their last two league outings but started fast against Spurs, with a sharp touch and finish into the bottom corner from in-form Salah giving them the lead on 11 minutes.

Ivan Perisic had a header deflected onto the post by Liverpool goalkeeper Alisson and Ryan Sessegnon saw a penalty shout from a challenge by Trent Alexander-Arnold waved away as Spurs came to life – but the Reds struck again just before the break thanks to a gift from Eric Dier.

The centre-back miscued a header towards his own goal and Salah (40) raced through to chip in his ninth goal in eight games.

Tottenham were sent out early for the second half and – not for the first time this season – were better after the break, with Alisson again pushing a Perisic effort onto the woodwork before Harry Kane (70) fired home a brilliant strike when played in by sub Dejan Kulusevski.

Rodrigo Bentancur went close with a couple of headers and Kane glanced wide as Spurs desperately sought another late goal but Liverpool clung on for their first away win in the Premier League this season to move up to eighth and within seven points of fourth-placed Spurs, with a game in hand.

EPL: Arsenal win at Chelsea to return to top of table