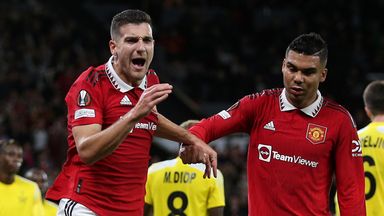 Manchester United will face Barcelona in their Europa League play-off in February.

Xavi’s side dropped into the competition after finishing third in their Champions League group, while Man Utd lost out on top spot to Real Sociedad.

In some other fixtures, Juventus face FC Nantes, Salzburg have been drawn against Jose Mourinho’s Roma and Ajax take on Union Berlin.

When will the games be played?

The first legs of the last play-off round will be played on February 16, 2023, before the return legs a week later.

When will Arsenal learn last-16 opponents?

Arsenal’s automatic progression to the last 16 of this season’s Europa League means they will have to wait for the conclusion of the play-off round before learning who they will face next in the competition.

The draw for the last 16 of the Europa League will take place on February 24, 2023, a day after the play-off second legs, with the last-16 ties held on March 9 and March 16 respectively.