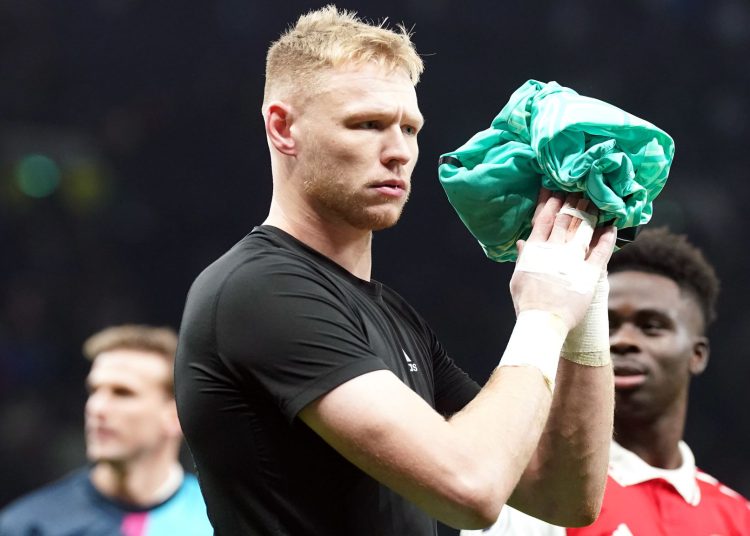 A 35-year-old man has been charged with assaulting Arsenal goalkeeper Aaron Ramsdale after their match with Tottenham Hotspur.

A statement from the Met Police read:

“Joseph Watts, 35 (23.06.87) of Hackney was charged on Tuesday, 17 January with assault by beating, going onto an area adjacent to playing area and throwing a missile onto a football playing area, both contrary to the Football (Offences) Act 1991.

He is due to appear at Highbury Magistrates’ Court on Friday, 17 February.

The Met’s Football Investigations Team were assisted in their enquiries by Tottenham Hotspur Football Club.”

After referee Craig Pawson blew his whistle to end the game, Ramsdale appeared to go around the net to grab his water bottle. But a supporter climbed on a billboard and attempted to land what appeared to be a kick on the 24-year-old’s back.

Ramsdale, who was facing the other way, described it as an attempted “punch”.

Tottenham have been quick to act with the fan being banned from the stadium.

Speaking about the incident, Ramsdale said to Sky Sports:

“The Spurs fans gave me some throughout the game. I was giving some back. The people I did give it to greeted it sportsmanlike but one fan tried to give me a little punch on the back. It is a shame as it is just a game of football at the end of the day. Both sets of players tried to bring me away but thankfully nothing too drastic happened. It is a sour taste but I’m sure we will enjoy it when we go back into the dressing room.”

An own goal from Hugo Lloris and a long-range effort from Martin Odegaard secured the three points for Arteta’s side, who have now moved eight points clear at the top of the Premier League.

PL: Rio Ferdinand claims "Partey is not on Casemiro's level"