Joseph Esso: Hearts of Oak have a new kingpin

Settling down at a new team usually takes time. New set of teammates, a new culture and new objectives all need time to adapt to. It’s very normal in professional football, and very often coaches play it safe with the ‘it will take time for him to settle down’ line when referring to new recruits.

Joseph Esso however has taken exception to this trend after joining Hearts in February this year. The Phobians who were dealt a serious blow in the transfer window, losing their two highest scorers from the last season in former captain Thomas Abbey and star forward Kwame Kizito had to act fast in terms of attacking reinforcements.

They quickly snapped up the 21 year old on a free transfer and tied him down on a 3 year deal after he opted against renewing his contract with Ebusua Dwarfs where he enjoyed a stellar final season, forming a lethal partnership with Nicholas Gyan. He scored 9 goals in 22 appearances to help the Cape Coast side to a 4th place finish.

Things looked gloomy for Esso in the beginning when Frank Nuttal- the man responsible for bringing him to the club, was fired days after he joined the club. But after a difficult early pre-season, Esso finally showed the Hearts faithful glimpses of his brilliance in a pre-season friendly loss to Elmina Sharks at the Cape Coast Stadium.

“I just joined Hearts of Oak and we are now understanding ourselves on the field, but I’m sure everything will move on smoothly and we will understand each other soon. I believe in hardwork, and with hardwork I will soon get goals for the club,” he said after the Elmina Sharks game.

He was spot on. Esso was instrumental on his league debut for Hearts, winning a penalty which Winful Cobbinah duly converted in their 1-1 opening day draw against Techiman Eleven Wonders. 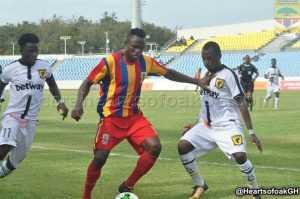 Esso in action for Hearts against AshGold

Perhaps his best performance in a Hearts shirt yet, was the Phobians first game at their adopted home grounds in Cape Coast against league leaders Ashanti Gold, where he was the shining light in a poor performance from the home team.

His willingness and determination to chase down every ball, coupled with his selfless off the ball movement geared towards creating space for his teammates was evident for all to see. He crowned his brilliant individual performance with a well taken goal which had Ishmael Addo written all over it.

He scored his second goal of the season in the following game, against his former side Dwarfs, running the Dwarfs defense rugged en route to a 2-0 win for Hearts. The incredible form and consistency he has shown so far this season has rightly led him to be voted Hearts of Oak’s Player of the Month of March, with his goal against AshantiGold voted Goal of the Month.

Esso’s talents have already received national recognition having been called up for the Black Stars B team during the qualifying process for the 2018 CHAN, although he narrowly missed out on the 2017 WAFU Cup winning squad to the surprise of many.

The energy, pace, power and mental drive to make things happen puts him up there as one of the signings of the season so far. He has certainly made an immediate impact on this Hearts side, and if his early performances are anything to go by, it’s safe to say in the words of Hearts assistant coach Edward Odoom that “Esso is a perfect addition to the Hearts of Oak setup.”