The Deputy Minister for Youth and Sports, Pius Enam Hadzide, and the acting National Sports Authority (NSA) Director-General, Robert Sarfo Mensah, have been suspended by the President over the fake journalists scandal that has rocked Ghana’s participation in the 2018 Commonwealth Games in Gold Coast, Australia.

“This decision has been taken following preliminary investigations into the circumstances that led to the arrest of 60 Ghanaians, who had allegedly attempted to enter Australia by false pretences in the ongoing 21st Commonwealth Games,” a statement from the Presidency said.

These investigations are being undertaken by the Criminal Investigation Department (CID).

Citi News’ Presidential Correspondent, Sammi Wiafe, reported that President Nana Akufo-Addo expressed his anger with the episode after meeting with Mr. Hadzide and the Chief of Staff earlier today [Thursday].

President Akufo-Addo also described the scandal as an international disgrace.

Aside from the suspension, the President of the Ghana Olympic Committee, Ben Nunoo Mensah; the Board Chairman of the NSA, Kwadwo Baah Agyeman, and the head of the delegation for the 2018 Commonwealth Games, Mohammed Sahnoon, have also been recalled from the Games to assist with the investigations.

Last week, it emerged that some 50 Ghanaians had been deported from Australia after they were deemed to be “non-genuine travelers” posing as journalists for the Commonwealth Games.

According to Australian authorities, although all the affected persons had the necessary accreditation, they were not convinced the reported persons were real journalists.

Following this, the government referred the case to the National Security for investigations to begin.

The Minority in Parliament, however, rejected this move, insisting that the scandal be probed by an independent commission of enquiry under article 278 of the Constitution of Ghana.

In the midst of the probe into the scandal, the office of the Deputy Secretary-General of the Ghana Olympic Committee, Rev. Richard Quarcoo, was ransacked by some unknown persons on Monday.

Citi Sports sources indicated that the office may have contained some documents relating to the saga that has rocked.

Find below the full Presidency statement 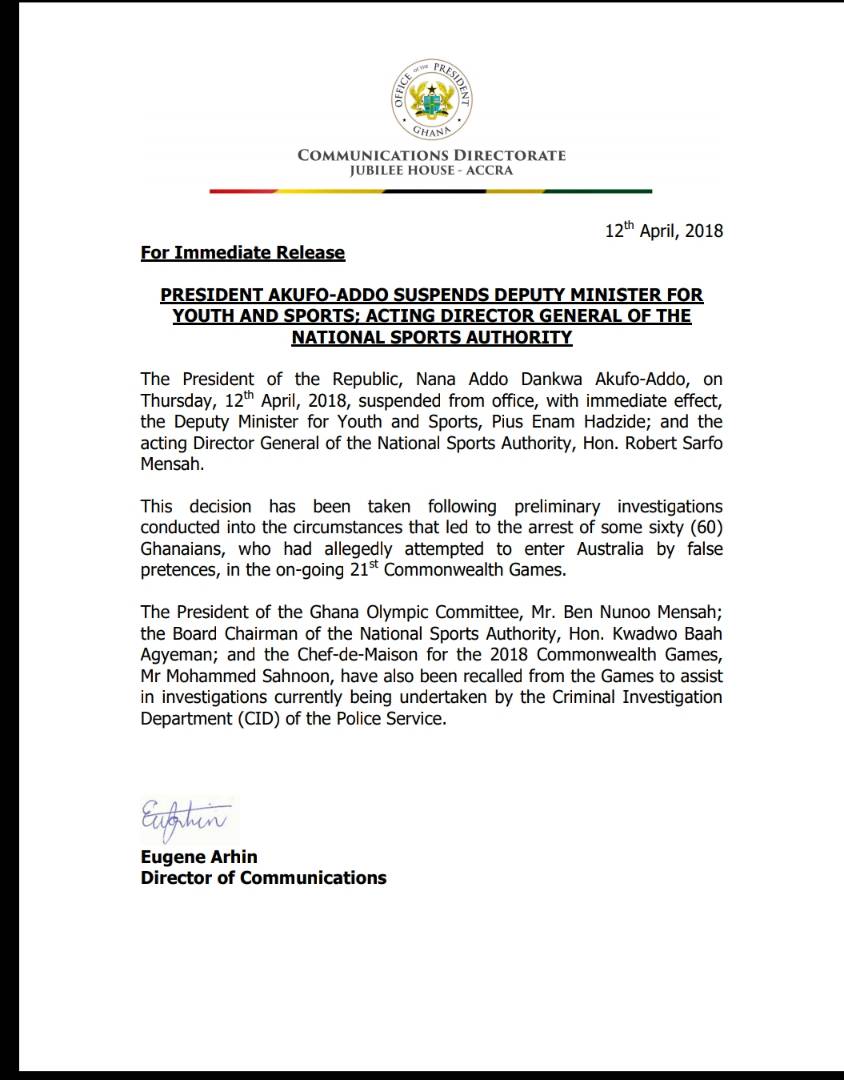 ‘I did no wrong’ – Suspended Dep. Sports Minister

'I did no wrong' – Suspended Dep. Sports Minister