The Ghana Swimming Association has suspended its president, Theophylus Edzie, for certain acts of abuse of power in relation to the 2018 Commonwealth Games in Gold Coast, Australia.

Ghana’s participation in the Games was marred by several incidents of visa fraud and racketeering which led to the deportation of about 60 persons from Australia.

Three athletes who went to the Games to represent Ghana did not return with the contingent.

For the Ghana Swimming Association, its decision follows investigations into rumours of Edzie adding 16 names to the original 10 slated for the Games.

He is said to have gone further to include names of his relatives to the list.

He is also accused of getting hotel accommodation for 11 persons who were not of the swimming fraternity. These persons were said to have gone to inspect swimming facilities.

In statement released on Thursday by the association, his suspension was also triggered by his interaction with certain bodies and individuals in Australia concerning the Games on the blind side of the Swimming Association.

The Association stated that its decision was in line with regulations of the global swimming body, FINA and that Edzie had to provide answers to all queries put before him.

Below are images of the press release: 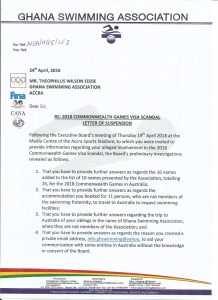 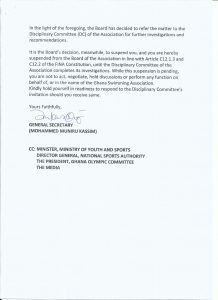