Black Stars forward Jordan Ayew has been voted Swansea’s Players’ Player of the season  at the team’s end of season awards on Wednesday night.

The Ghana international has been in terrific form for the Swans this term which has seen him at the forefront of their fight against relegation and his efforts were recognised by his team mates. 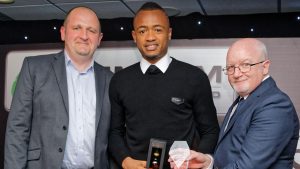 He also picked up the award for the club’s top scorer with 11 goals in all competitions so far and the goal of the season award for his wonderful solo goal against Wolves in the FA Cup.#

He needs no introduction…

Swansea are currently just two wins away from securing their safety in the league, and Jordan is expected to play a key role in their quest for survival.