Koranteng writes: Swansea look to Jordan Ayew to save their league status

As English Premier League side Swansea City battle relegation, I believe Ghana forward Jordan Ayew is the man to keep them afloat and I argue my point in this feature.

As another English Premier League season draws to a close, Welsh outfit Swansea City find themselves desperately fighting for survival like they have in the past two campaigns. The Swans go into the last three games of the season needing two wins to secure safety for at least another term.

Two seasons ago, Swansea were saved by a band of battlers led by Ghanaian Andre Ayew who contributed guts and goals to the ultimately successful cause. And while the senior Ayew is within Swansea’s ranks – after a fruitless stint at West Ham United that ended last winter — Swansea now look to his younger sibling, Jordan, to pull them out of the latest pickle.

Jordan – who moved to the Liberty Stadium in 2017 following his brother’s departure – has impressed since the appointment of Carlos Carvalhal as manager in December, especially after being shifted to a central role and often playing as a lone striker.

Scoring in a 2-1 away victory over Watford to get Carvalhal’s stint to a winning start, the former Nania FC youth has since topped Swansea’s charts for goals and shots — registering five and 20 respectively in each column – while the 11 chances he has created are second only to Tom Carroll’s 15 for the club during that period.

Unsurprisingly, then, Jordan was voted the club’s Player of the Year by his teammates this week, a testament to his immense influence and remarkable form this season.

Jordan Ayew in action against Arsenal

It’s a streak Swansea would hope Jordan keeps up throughout what remains of their 2017/18 business, beginning with the trip to coastal Bournemouth this weekend in the league.

The Cherries have conceded the most goals at home of all Premier League clubs this season, and Swansea will certainly fancy their chances.

Carvalhal has shown his preference for attacking football thus far in his time at the helm, which should be right down adventurous Jordan’s alley. And although Swansea haven’t scored against Bournemouth in their last three meetings, Jordan’s current form should give his side a huge boost. 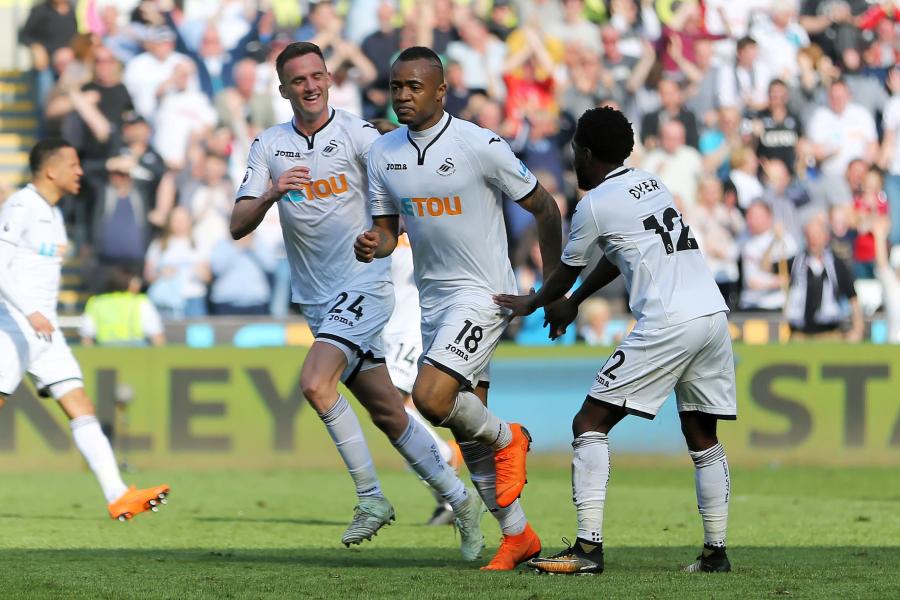 Southampton on Tuesday night represent perhaps the most important fixture for Swansea as the Saints themselves are also resisting the tide sweeping clubs down to the Championship. The Saints have been leaking goals in recent weeks and this is a factor that will interest Swansea and their top-scorer, Jordan.

The defensive frailties that have seen Southampton concede three goals in as many away fixtures from their last four is certainly something Jordan will look to exploit, and surely he has the pace, skill and sheer will to do so. It’s such an arsenal Swansea’s chances of survival primarily rest on, and Jordan has proven he is more than capable of meeting those expectations.

Having already lost a relegation battle in his debut season in the Premier League with Aston Villa, Jordan is most definitely not prepared to experience that fate once more. As determined as he is, trust the 26-year-old to summon his inner Andre – typifying the indomitable spirit and limitless ability of the Ayews – to save Swansea.