Hearts of Oak have announced the sacking of their head coach, Henry Wellington, from the team with immediate effect and the appointment of Seth Hoffman as his replacement.

The decision was taken at a meeting held at the team’s secretariat on Thursday.

Even though no official reason was given, there is very heavy speculation that the team’s poor results in the ongoing Zylofon Cash Premier League have forced the hand of the management to act. 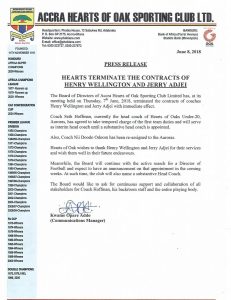 In addition to Wellington, they also fired Jerry Adjei, one of the coaches at the club.

After the first round of the league, the Phobians are 13th on the league log with 17 points after recording 4 wins, 5 draws and 5 losses and their fans are not happy with the team’s output.

Hoffman, who coaches the team’s U-20 setup, will take temporary charge of the senior side until a new substantive coach is found.

According to the statement signed by Kwame Opare Addo, the team’s spokesperson, Hearts are on the hunt for a new Head Coach and a Director of Football.

Wellington is the second head coach fired by Hearts in this calendar year. In February, they sacked Frank Nuttal for his participation in what the club described as “underhand dealings”.