#Number12: Nyantakyi could be discussed at Sunday’s FIFA Council meeting

Embattled President of the Ghana Football Association Kwesi Nyantakyi, is very likely to be a topic of discussion when FIFA’s Council meets in Russia on Sunday.

Nyantakyi, who is also the 1st Vice President of CAF and also on the FIFA Executive Council, has been implicated in acts of corruption, several of which are clearly against FIFA’s code of ethics, in Anas Aremeyaw Anas’ latest investigative exposé.

The shocking footage in the exposé, which also implicates 78 referees and match officials, has seen the government of Ghana take immediate action by announcing an imminent dissolution of the GFA.

Should this move be carried out, the country could face a lengthy ban from FIFA, which frowns on political influence in the running of football.

Nyantakyi was arrested last month, and later granted bail, after he was accused of defrauding by false pretense on the orders of President Akufo-Addo upon viewing the documentary dubbed “Number 12”.

His arrest followed that of CAF 2nd vice Constant Omari, who was arrested and detained in DR Congo for charges of embezzlement.

FIFA last month confirmed to Citi Sports they were closely monitoring the situation in Ghana. 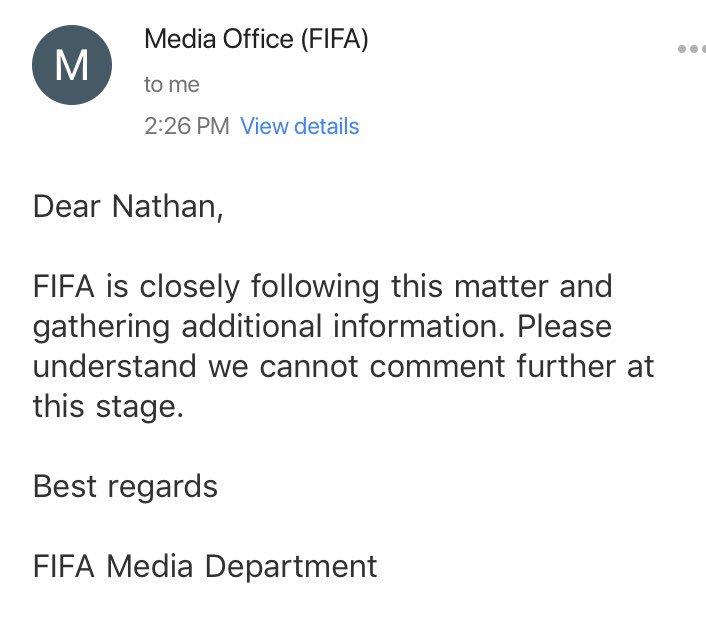 The agenda for FIFA’s Council meeting on Sunday, has an allocation for matters relating to the world football governing body’s code of ethics, and current happenings in Ghana is expected to be discussed.

The president of the Brazilian FA, Marco Polo del Nero, was handed a lifetime ban earlier this year after being found guilty of taking bribes, after initially being suspended in December 2017 over allegations that he took inducements in exchange for awarding media and marketing rights.