Cristiano Ronaldo may have grabbed headlines with a hat-trick as Portugal drew 3-3 with Spain in a pulsating World Cup encounter on Friday but Black Stars striker Asamoah Gyan, who is not even at the tournament has garnered significant support after a gaffe sought to write him out of the history books.

After the game, Ronaldo was wrongly touted as the first player in history to score at eight successive major tournaments.

Football data experts Opta Joe, were one of the first to put out the stat which was widely circulated on social media, acknowledging the supposed milestone by Ronaldo following his first goal on Friday. 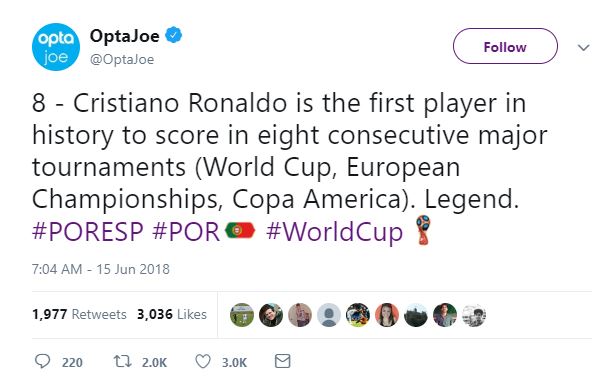 But this might have proven to be erroneous as Africa’s top scorer at the World Cup had set that record at the 2015 African Nations Cup.

A number of Ghanaians, and Africans, in general, soon leapt to the defence of Gyan, with many suggesting that the apparent oversight was a sign of the disregard for Africa.

This Asamoah Gyan record in successive international tournaments oversight another example of how copy and paste journalism is thriving.

Once one account said it was Ronaldo, major media houses just lapped it up. Simple#WorldCup

Here is an overview of @Cristiano and @ASAMOAH_GYAN3’s goals at major tournaments. #Ronaldo WASN’T the first to score in nine successive tournaments, Gyan was!

Yesterday we said that Ronaldo was the first player to score in nine international tournaments. That is not True . Ronaldo is behind one African man Ghana’s Asamoah Gyan. He deserves utmost Respect and due recognition. #WCsoka25 pic.twitter.com/fGKzpag0n5

Cristiano Ronaldo is the second player to score in 8

One Twitter user, however, suggested that a lack of recognition by Africans for their own sporting greats may be the cause of this gaffe.

He said we failed to honour Gyan when the record was set.

No it is because African’s don’t keep records and hail our own.. It took Ronaldo’s records to remind us of Asamoah Gyan who did it way back in 2017.. We need to step up with ohr record keeping.

He has scored at three World Cups and six African Nations Cup tournaments.

Gyan, who plays for Kayserispor in Turkey, commented on this on Twitter saying: “People disregard my achievements in the World Cup history but I want the whole world to know that I have not been given the fair shake but records will remain forever.”

His first goal at a major tournament against Czech Republic at the 2006 World Cup, before following that up with the first goal of the AFCON 2008, which Ghana hosted.

He scored three more goals followed at AFCON 2010, including the headed winner against Nigeria in the semifinals.

Gyan probably peaked at the World Cup in 2010, with three goals, and was famously denied a pivotal fourth under heartbreaking circumstances against Uruguay, that would have sent Ghana to the semi-finals.

He then scored a goal apiece in the next two AFCON tournaments as well two more, against Germany and then Portugal, at the World Cup in 2014.

At the 2017 AFCON, Gyan scored Ghana’s only goal in the 1-0 victory over Mali in the Black Stars’ second group game