The government has indicated that it will work with FIFA to allow all local football activities to continue in the country.

This is among the resolutions of its meeting with a delegation from the world football governing body as a result of the current crisis in Ghana football.

[contextly_sidebar id=”YDki5mqFChPhpClFNOaEYDRrQ0lJm6E0″]A statement signed jointly by the Minister for Information, Mustapha Abdul-Hamid and FIFA’s Director for African and the Caribbean, Veron Mosengo-Omba on Friday said;

“FIFA in consultation with the Ghanaian government will put in place interim measures to allow for the continuation of football in Ghana.”

The Ghana Football Association (GFA) announced earlier this month that it had suspended all football activities in the country following an investigative film that exposed deep-seated corruption in local football.

The video, produced by journalist Anas Aremeyaw Anas and his TigerEye PI team featured top officials of the football association including its former president, Kwesi Nyantakyi allegedly taking bribes to influence various aspects of the game, including call-ups to the national team, the duration of playing time for some players and the selection of unfit players and referees to participate in games, among other things.

Kwesi Nyantakyi, was seen allegedly receiving a bribe to illegally secure a $15 million sponsorship deal for Ghana’s local league, acting simultaneously as FA boss and the representative of a ‘ghost’ company that would serve as agent, resulting in him pocketing about 20% of the sponsorship sum, contrary to FIFA and GFA’s regulations.

More than 100 referees were also caught on tape taking bribes to manipulate the outcome of games in a team’s favour.

In the face of threats of a possible ban imposed on Ghana by FIFA, the government announced that it had taken steps to dissolve the GFA following the exposé.

FIFA’s delegation to Ghana to address the impasse has since expressed its readiness to ensure that football in the country is reorganised.

FIFA officials are expected to engage the government of Ghana in a second meeting in Switzerland over the matter to finalise an arrangement to get Ghana football running again.

“The Ghana government delegation will continue discussions with FIFA in Zurich, Switzerland, for the purpose of finalizing interim arrangements regarding football in Ghana,” the joint statement from the two said. 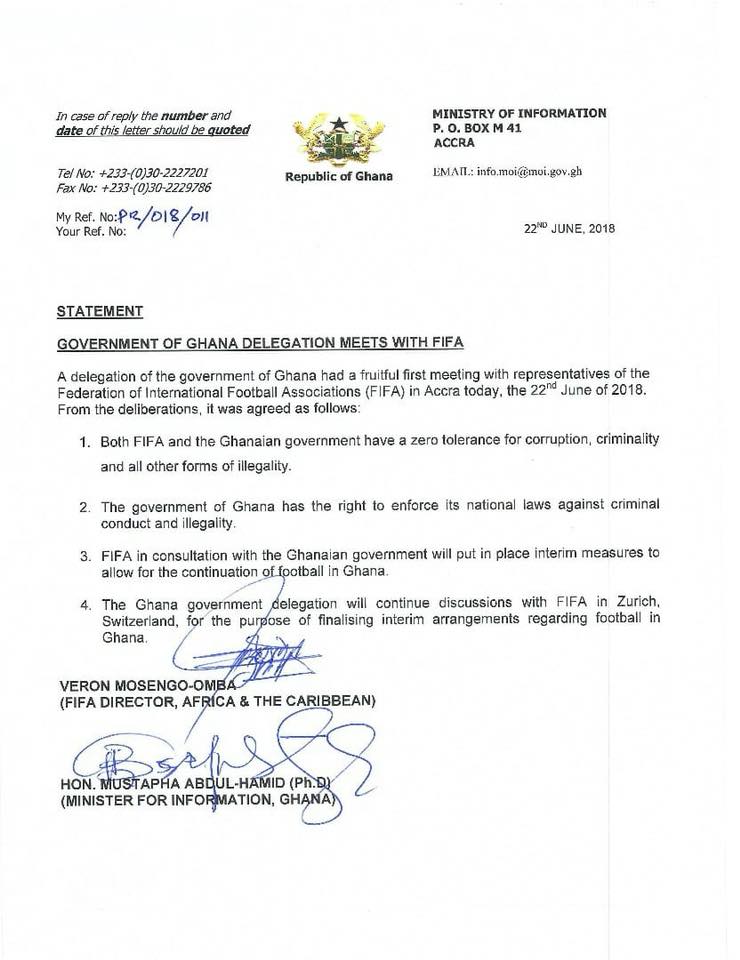