Millions of fans will follow the match across the BBC from 15:00 BST, as the quarter-final clash kicks off in the Russian city of Samara.

England has not reached the last four of the tournament for 28 years and their sole World Cup win came in 1966.

England are favourites to reach the last four from what is considered the easier side of the draw, with the winners of the match facing Russia or Croatia – who play later at 19:00 BST.

With the country basking in a heatwave, thousands of fans will watch the game on big screens at events up and down the country; barbecues are being prepared and pub gardens are set for bumper business.

The climax of England’s World Cup penalty shootout win over Colombia on Tuesday was seen by 23.6 million viewers on ITV. 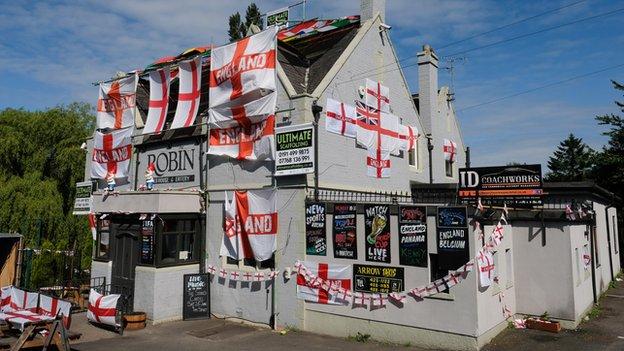 Television: Countdown to the match starts at 14:00 on BBC One, presented by Gary Lineker. The analysis comes from Alan Shearer, Rio Ferdinand and Jurgen Klinsmann, with commentary by Guy Mowbray and Martin Keown.

Radio: Build-up begins at 06:00 with Rachel Burden in Samara, followed by Robbie Savage’s World Cup Breakfast (08:30). Mark Chapman and Kelly Cates continue coverage from 11:00. John Murray is the match commentator alongside Chris Waddle, with the post-match reaction in 606.

How the teams shape up

England could be without striker Jamie Vardy who has a groin injury, but are hoping that left-back Ashley Young recovers from an ankle knock and midfielder Dele Alli’s thigh injury is not a major problem.

Captain Harry Kane is aiming to become only the second Englishman after Lineker to win the Golden Boot for the World Cup’s top scorer. He needs one goal to break Lineker’s feat of scoring six times in 1986.

“My target isn’t the Golden Boot,” Kane told reporters. “The target is to win the tournament. That’s always been the target.”

Sweden are 24th in Fifa’s rankings – 12 places below England – and are without national hero Zlatan Ibrahimovic – who retired from international football two years ago.

But they finished ahead of the Netherlands in qualifying, beat Italy in the subsequent play-offs and topped the group in Russia containing defending champions Germany.

After Sweden’s 2-0 win over Switzerland which sealed a spot in the last eight, coach Janne Andersson said: “We’re not satisfied with what we’ve done – we want to win the next match too.”

Expectation levels among England fans were relatively low ahead of the tournament, after a series of previous disappointments including a humiliating knockout defeat by Iceland at Euro 2016.

However, an early exit for defending champions Germany, as well as the shock departure of five-time victors Brazil on Friday, has boosted optimism in the England camp.

In fact, it is the first time in the history of the competition that none of Brazil, Germany or Argentina has made the semi-finals.

Many supporters have been chanting, singing or simply declaring “it’s coming home” in reference to the ‘Three Lions’ song written for Euro 96 by comedians David Baddiel and Frank Skinner with the band the Lightning Seeds.

Fans on social media have been sharing polite letters sent to them by Southgate – and the Twitter hashtag #GarethSouthgateWould was trending.

Southgate, 47, has said England must “make the most” of their World Cup opportunity but warned against under-estimating an “older, more experienced” Sweden.

“You have to enjoy the good moments, but I am a long way from perfect, there are plenty of mistakes we have made while we have been here and we will make moving forward, so I think it is dangerous territory if we get carried away with things,” said Southgate.

That has not stopped England fans singing a tribute to the manager to the tune of Atomic Kitten’s 2001 hit ‘Whole Again’:

Looking back on when we first met,

I cannot escape and I cannot forget,

Southgate, you’re the one, you still turn me on,

You can bring it home again!

Southgate, who famously missed a penalty shootout against Germany in Euro ’96, has welcomed the altered song: “It’s not as questionable as most of the lyrics that have been sung about me in the past,” he quipped.

Visa scandal: Hadzide not guilty; to be reinstated on Monday – Nana Addo

Visa scandal: Hadzide not guilty; to be reinstated on Monday - Nana Addo