Black Stars midfielder, Thomas Partey and his Atletico Madrid team will face Valencia on the opening day of the new Spanish La Liga season which starts on August 19.

The fixture was the 8th drawn on Tuesday when the full season’s set of games was put together by the Spanish League.

Atletico Madrid head into the new season as defending Europa League champions and they will hope to make a better push for the title than they did last season when they finished 3rd.

Partey played 33 league matches of that season and pitched in with 5 goals.

What about Emmanuel Boateng? 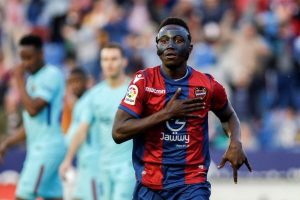 Emmanuel Boateng and his Levante team will start the new La Liga campaign away at Real Betis on August 19, 2018.

His goals included 3 against Barcelona in a 5-3 win that put him in the headlines. He subsequently got a Black Stars call-up to play against Japan and Iceland in May and June.

He is currently with Levante in their pre-season camp but he has sustained a knee injury. It is not clear if he will be able to return to action before the start of the new Spanish League season.

After facing Betis, Levante will take on Celta Vigo, Valencia, Espanyol and Sevilla in their first five games of the new season.

While Boateng’s Levante have a manageable tie, another Ghanaian, Mubarak Wakaso, who plays for Deportivo Alaves will have to deal with defending champions, Barcelona, on the opening weekend.

Following the start against the Cules, Alaves will go against Real Betis, Espanyol, Real Valladolid, and Rayo Vallecano in their first games of the new season.

Wakaso helped the team to finish 14th on the league table last season.

When is the El Clasico?

The clashes between arch rivals, Barcelona and Real Madrid, will take place on October 28 at the Camp Nou and on March 3, 2019 but the matches will experience the absence of the rivalry between Cristiano Ronaldo and Lionel Messi.

Ronaldo will be wearing the black and white of Juventus in the new season after his departure from Real Madrid earlier this month.