Commey had lost a close twelve round split decision to Easter in September of 2016. Easter was down in the eight round of that bout.

Commey will stay busy this Saturday night, when he faces Yardley Armenta Cruz (24-10, 14 KOs) on the Andre Berto-Devon Alexander undercard at the Nassau Coliseum in Uniondale, New York.

With his victory, the obligation of the IBF’s mandatory defense is now on Garcia’s shoulders.

The IBF has ordered him to reach a deal with Commey by August 30th.

“Negotiations should commence immediately and be concluded by August 30, 2018. In the event that you are unable to come to an amiable agreement with Commey, the IBF will call for a purse bid.” 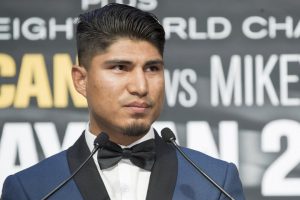 Earlier this year, he captured the IBF’s junior welterweight title with a win over Sergey Lipinets. He was then ordered by the sanctioning body to make a mandatory defense against Ivan Baranchyk.

While he initially agreed to face Baranchyk, he then backed away from that decision by vacating the belt and went back down to 135 for a more lucrative opportunity with Easter.

At the moment, Garcia is discussing the idea of moving up by two weight divisions to challenge IBF welterweight champion Errol Spence on a December date.

Cobblah: Satellites will record a comfortable win against Benin