The striker has signed a four year deal but the transfer fee involved remains unknown.

The 22 year old striker scored 21 goals in his time as the Swiss club and will be hoping to continue with his impressive goal scoring form. 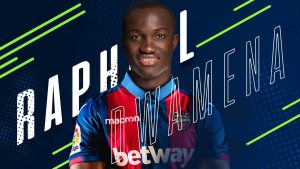 Dwamena was slated to move to English Premier League side last summer but a heart condition uncovered during his medical ensured that the deal fell through.

He will be expected to form a lethal partnership with fellow Ghanaian striker Emmanuel Boateng who scored a hat-trick against Barcelona in the 2017/2018 campaign.