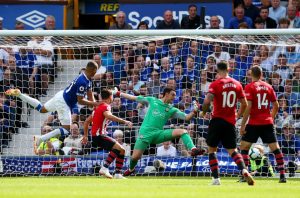 Onlookers baulked at the fee forked out for Richarlison, but the Brazilian continued his fine start at Everton by netting his third for the club after Walcott’s opener to ensure a 2-1 win against a Southampton side that pulled one back through Danny Ings early into a vastly-improved second half.

The relief was palpable at the final whistle as Silva’s men held on at a packed Goodison Park, where Saints’ wait for a win stretches back to 1997.

Jamie Vardy was sent off on his return to the Leicester side but the Foxes still eased early-season pressure on manager Claude Puel with a victory over newly-promoted Wolves.

Nuno Espirito Santo’s side hit the woodwork on three occasions and wasted a couple of gilt-edged chances before succumbing to a 2-0 defeat at the King Power Stadium. 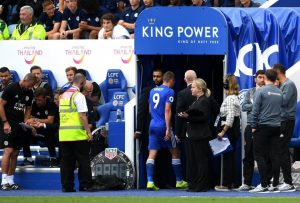 An own goal from full-back Matt Doherty and a deflected effort from home debutant James Maddison were enough to secure the points for Leicester – who saw out the closing stages having lost Vardy following an ugly challenge on the unfortunate Doherty.

Lucas Moura gave the Spurs the lead with a sublime finish just before the break but Aleksandar Mitrovic levelled for the Premier League new boys shortly after the restart.

Kieran Tripper picked up where he left off at the World Cup with a fine free-kick to put his side ahead and Kane struck in trademark three minutes after to seal the points.

West Ham’s expensively assembled squad crashed to a second straight defeat after Bournemouth came from behind to win 2-1.

Manuel Pellegrini’s first taste of the London Stadium ended in frustration as goals from Callum Wilson and Steve Cook made it two wins from two for the Cherries.

The West Ham board may have splashed out on nine new players over the summer, but on this evidence it seems £100million does not guarantee positive results.

Jack Wilshere was anonymous, record signing Felipe Anderson not much better, and defender Fabian Balbuena was constantly exposed by Wilson in a torrid second half.

Marko Arnautovic, last season’s player of the year, had fired the hosts into the lead with a first-half penalty, but after the break they played like strangers for the second week in a row.

Neil Etheridge was the Cardiff hero as his stoppage-time penalty save prevented 10-man Newcastle from winning an eventful Premier League contest which finished 0-0.

Kenedy stepped up to take the spot-kick but his weak effort was palmed out by Etheridge in what was the final moment of action, capping a miserable afternoon for the Brazilian.

Record signing Traore could start from Wolves at Leicester