PHOTOS: Isaac Dogboe works out ahead of Otake bout on August 25

WBO Super Bantamweight champion, Isaac Dogboe, on Wednesday had a workout session at the Michael Carbajal’s 9th Street Gym in Phoenix, Arizona ahead of his August 25 bout with Japanese opponent contender, Hidenori Otake.

The bout is Dogboe’s first title challenge since he won the belt back in April after defeating the then-champion, Jesse Magdelano.

The workout session formed part of the mandatory media obligations the two fighters have to fulfill before their clash on Saturday. 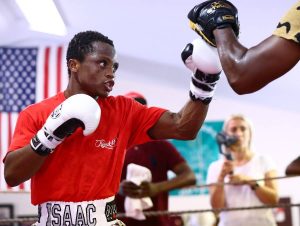 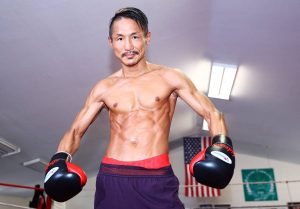 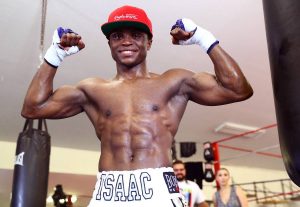 After the session, the two boxers shared their thoughts of the bout to the media.

“On life as a world champion: “I give praise to the man upstairs, God of creation. We thank him for everything that has happened to Team Dogboe. Being a world champion is great.”

On the reception he received in his native Ghana after winning the title: “The whole nation came out to meet me at the airport. It was amazing.”

On joining the rich history of Ghanaian world champions: “I am very humbled. Boxing in Ghana isn’t as regarded as it is over here. We’ve been able to revive boxing over there. They are loving it. We are changing the perspective of the sport. It is great.”

On Hidenori Otake: “Otake is very strong, physically strong. He has a great record. You can’t underestimate Otake. We’re not underestimating him at all. He’s someone we have our eyes on, and we’re making sure, come Saturday, we are going to take him out.”

On the lack of trash talk compared to before the Jessie Magdaleno fight: “Otake is a gentleman. He’s so humble, and when two humble warriors come together, it’s mutual respect. And that’s how we’re taking it.”

On Isaac Dogboe: “He is a good pressure fighter and a strong fighter. I’m going to use his pressure and his power against him.”

On the recent success of Japanese fighters: “Japanese boxers have been fighting very well recently, and I am looking to do the same. It’s great for Japanese boxing when we come to America and do very well.”

(All quotes and pictures are sourced from Top Rank Promotions)