Ghana’s Aduana Stars were smashed 6-0 by Raja Casablanca in their final Group A tie in the CAF Confederations Cup on Wednesday.

Aduana Stars were already eliminated from the competition and were hoping to end their run on a good note but Raja, who needed a result to ensure top spot and a place in the next round of the competition, were in no friendly mood.

They opened the scoring in the 3rd minute through Mouchine Iajour and he found the net again in the 15th minute to make it 2-0.

Zakaria Hadraf made it 3-0 in the 30th minute and Soufiane Rahimi increased the tally to 4 in the 33rd minute.

The scoring in the second half through Mahmoud Benhalib who scored in the 67th and 82nd minutes to leave Aduana Stars under a heavy loss.

They finished the group stage on 4 points while Raja topped with 11 points. Vita had 10 points with ASEC on 9. 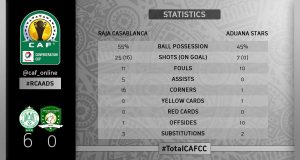 What happened to Aduana Stars?

On Tuesday, it emerged that several Aduana Stars were suffering from food poisoning and that was confirmed by their head coach, Kenichi Yatsuhashi. He said that 14 players had travelled with the team to Morocco for the match.

Of the Ayews’ exclusion from the Black Stars; Kwesi Appiah is inconsistent

US Open 2018: Andy Murray loses to Fernando Verdasco in second round

US Open 2018: Andy Murray loses to Fernando Verdasco in second round