There were goals galore as the Premier League returned with a bang on Saturday after the international break.

Here’s what happened in the 2pm kick-offs…

Eden Hazard hit a hat-trick as Chelsea thrashed Cardiff to move above Liverpool to the top of the Premier League table.

The Blues fell behind on 16 minutes to a Sol Bamba strike but came roaring back, with Hazard proving too hot to handle.

The Belgian playmaker netted twice in six minutes towards the end of the first half and then claimed his treble from the spot ten minutes from time.

Bournemouth blew away Leicester at the Vitality Stadium as their impressive start to the season continued.

The Cherries scored three times in the first half, with Ryan Fraser netting twice and Josh King firing home from the penalty spot.

Leicester had Wes Morgan sent off for two bookable offences with twenty minutes left and their afternoon got even worse when Adam Smith stuck a fourth for the home side.

Leicester had a late rally – James Maddison and Marc Albrighton netting on 88 and 89 minutes – but the result was never in danger for Bournemouth.

Eddie Howe’s men – tipped for relegation by many at the start of the season – have picked up 10 points from their opening five games, while Leicester have now suffered consecutive defeats.

Leroy Sane marked his return to the Manchester City team with a goal as Pep Guardiola’s side kept up their unbeaten start to the campaign.

David Silva doubled City’s lead before half-time – his 50th Premier League goal – and Raheem Sterling struck again early into the second half to wrap up a comfortable win for the hosts.

City were hardly tested despite a committed effort from promoted Fulham. 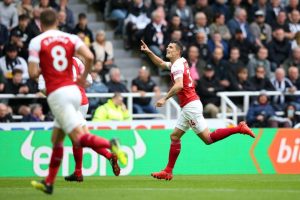 Mesut Ozil scored his first goal of the season as Arsenal secured a third successive victory at St James’ Park.
The midfielder – making his 200th appearance for the club cemented a 2-1 win at St James’ Park with his 58th-minute strike.

It came nine minutes after Granit Xhaka had opened the scoring for the visitors with a fine free-kick.

Ciaran Clark pulled a goal back for the hosts but it was too little, too late and Rafa Benitez’s side remain without a win this season.

Wilfried Zaha produced a moment of magic to earn all three points for Crystal Palace.

The Ivory Coast winger, back in the starting line-up after a groin injury, scored an unstoppable goal seven minutes before half-time after a mazy run had bamboozled the home defence.

Aaron Mooy struck the woodwork as Huddersfield searched for an equaliser in the second half but it never came and they remain without a win this season.