Former CEO of Airtel Ghana, Lucy Quist, has described her appointment to the FIFA Normalisation Committee tasked to run Ghana football as an “honour” and “an opportunity to serve Ghana.”

She was named together with Dr. Kofi Amoah, Kofi Duah Adonteng and Naa Odofoley Nortey as the four people who will run football in the country until March 2019.

The Normalisation Committee was the product of talks between the Government of Ghana and FIFA in August after FIFA warned of a suspension for Ghana if the case of dissolving the Ghana FA was not withdrawn from court.

The Normalisation Committee per FIFA’s directives will replace the Executive Committee of the Ghana FA and run the game in the interim in accordance with Ghana football statutes and those of FIFA.

The committee will also work out a timetable for elections of members of a new Executive Committee.

Madam Quist expressed her thoughts on the appointment and her broader vision for Ghana football in a series of tweets put out on Monday, September 17.

A time to serve.
This truly is an honour. Thank you to FIFA and the State & people of Ghana for this vote of confidence. Football is more than a sport – it is a national institution.
It is an institution that deserves the best skill and competence to run….

….It is an institution that has the potential to positively impact our development as a nation. Why? Because through football we discover great talent, discipline and techniques that are transferable to all aspects of life for success….

….Because through football, many have come to take interest in our country. It is a game of fun and passion. It is also a game of strategy!
I believe that as a normalisation committee we will work together with everyone who has a stake to restore pride….

…..in our country’s football and create the basis for our future great players.

Who are the members of the Normalisation Committee? 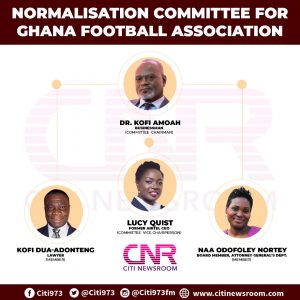