Former 3-time World Heavyweight Champion and Mayor of Kiev Vitali Klitschko and President of the WBC
Mauricio Sulaiman are happy to welcome these legends to the convention.

“In the coming days, the world will have Kiev as the capital of our sport, during the convention of the World Boxing Council, which will be attended by many of the most important personalities of boxing, including champions, former champions, promoters, coaches and representatives, as well as ring officers, many of them from the 166 countries affiliated to the organization,” commented Mauricio Sulaimán. 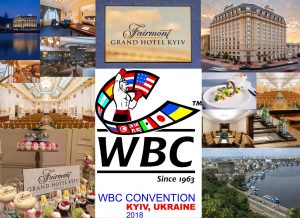 “We will work with the authorities, the promoters and representatives to create the future boxing of Ukraine,” he said.

Yaw Sakyi Afari, Business Manager of Azumah Nelson, who is also attending the 56th WBC Convention said
they would seek to collaborate with some of these legends to further promote the Azumah Nelson Fight Night and other boxing programmes.

“We will collaborate with boxing promotions companies and academies to promote our Ghanaian boxers in their countries and vice versa and also organize training programmes for our Ghanaian coaches”, Sakyi stated.

The WBC Convention is held every year to celebrate champions and address happenings within the sport. All major decisions within the WBC are made and communicated during these conventions.