Ghana’s Harrison Afful and Jonathan Mensah played their part in helping Columbus Crew go past Wayne Rooney’s DC United in the knockout stages of the MLS Playoffs on Thursday night.

Crew won the match 3-2 on penalties after the match ended 2-2 after extra time.

Mensah lasted the entire game for Crew and was part of the team that stayed on the pitch for the penalty shootout after playing his part in stopping former Man United forward Wayne Rooney from finding the net. 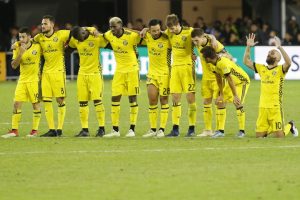 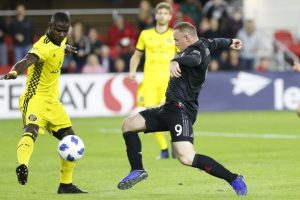 Afful, on the other hand, had a very busy evening and added his contribution to proceedings.

He sent in a cross in the 96th minute to Federico Higuain and the Argentine forward headed it in to make the score 2-1 before Nick DeLeon leveled the score for DC United.

It was the first ever assist Afful was providing for Columbus Crew in the MLS Playoffs despite making 11 appearances in the post-season.

Afful was substituted in the 120th minute for Patrick Mullins just before extra time elapsed.

After the match, he expressed the delight of having made it to the next round of the playoffs via a post on his Instagram page.

Up next for Afful and Mensah is an Eastern Conference semi-final clash with New York Red Bulls on November 4.

Hor Halutie: Ghanaian sprinter leaves for training camp in the US

I’m not divorcing my wife; I want annulment – Gyan

I'm not divorcing my wife; I want annulment - Gyan