Manchester City returned to the Premier League summit with a convincing derby victory over Manchester United at Etihad Stadium.

Pep Guardiola’s side were seeking the result they needed to go back to the top of the table after Liverpool’s lunchtime win over Fulham at Anfield – and it was rarely in doubt after David Silva bundled home an early goal to give them a narrow interval advantage.

City got the second goal their superiority deserved with Sergio Aguero’s rasping, rising finish past David de Gea three minutes into the second half following an exchange of passes with Riyad Mahrez.

Jose Mourinho’s side, without injured Paul Pogba, barely mounted a serious threat but were given hope of earning an unlikely point just before the hour when Romelu Lukaku was hauled down by Ederson seconds after he had come on as substitute. Anthony Martial sent the Brazilian the wrong way from the spot.

It briefly revived memories of last season’s dramatic derby here when United came from two goals down to win, but City never looked like losing control and wrapped up the win two minutes from time when substitute Ilkay Gundogan took advantage of static United defending to beat De Gea from close range following a 44-pass move.

Who can stop rampant Man City?

Manchester City’s answer to Liverpool briefly returning to the head of the Premier League table was emphatic as this win was a comfortable as the scoreline suggests, arguably even more so.

Liverpool and Chelsea remain unbeaten in the Premier League, although Maurizio Sarri’s side slipped as they were held to a 0-0 draw by Everton at Stamford Bridge. 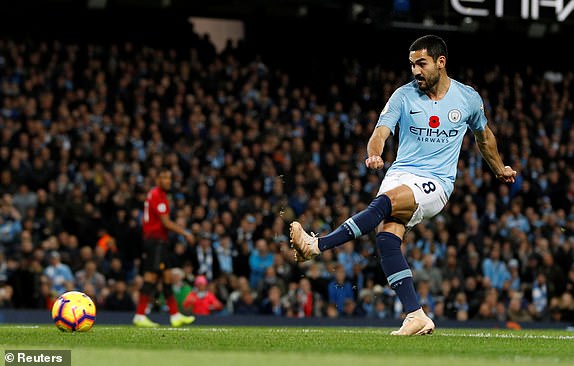 They remain very much in the title shake-up, as do fourth-placed Tottenham.

The problem for the chasing pack appears to be that Manchester City are currently operating on a different level to everyone else.

United were probably feeling pleased with themselves that somehow, despite barely laying a glove on City, they were actually still in contention for a point until Gundogan’s late goal ended all the arguments.

And it was a goal that summed up City under Guardiola.

The finish looked simple enough as Gundogan slipped in past some static United defenders to score with ease but it crowned a 44-pass sequence, the most before a goal since Juan Mata scored for Manchester United against Queens Park Rangers in September 2015.

City are two points clear of Liverpool but have a goal difference of +31 as opposed to +18 and this was another of their most difficult fixtures negotiated with their usual flair.

Manchester City’s latest win was built on the foundations built by three established members of their recent glories.

Sergio Aguero may have gone from brunette to striking blonde but under the new hairstyle remained the same lethal striker who has been the centrepiece of so many of their successes.

It was classic Aguero when he scored City’s crucial second three minutes after half-time, exchanging passes with Mahrez before lashing home a near-post finish that carried so much power, De Gea barely had time to react. 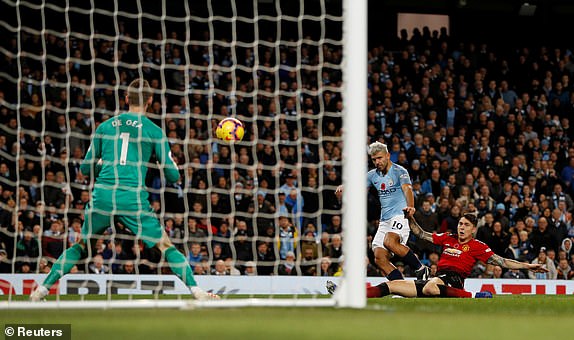 It was his 151st goal in 218 Premier League games and his 208th goal in 307 games in all competitions for City. These statistics emphasise his status as one of the modern game’s great strikers.

David Silva, at 32 now an elder statesman at City, set them on their way with the early opener and showed his usual knack of finding space in crowded areas and ability to dictate tempo even at the most frenetic times.

At the heart of it all was the unsung Fernandinho, the 33-year-old Brazilian patrolling midfield with class and quality, working effectively in the shadows.

Guardiola knows his worth – and will also know he will be very difficult to replace when the time comes.