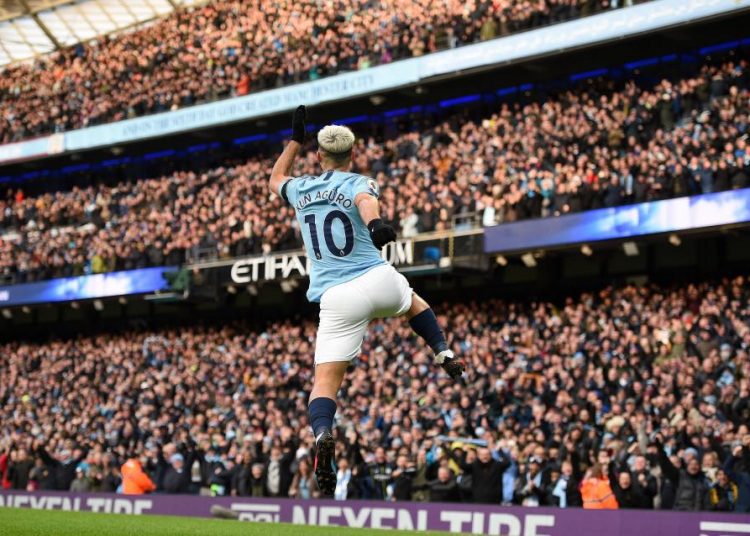 Chelsea were utterly humiliated at the Etihad as they were thumped 6-0 by a merciless Manchester City.

Pep Guardiola’s men piled the pressure on title rivals Liverpool, and Blues boss Maurizio Sarri, thanks to yet another Sergio Aguero hat-trick, as well as strikes from Raheem Sterling and Ilkay Gundogan.

It’s the first time in history Chelsea have conceded six goals in a Premier League match and they’ve now let in an astonishing ten goals in their last two away trips.

The champions were 4-0 up within 25 minutes through a combination of brilliance and calamitous Chelsea defending.

As early as the fourth minute, the visitors switched off to allow Bernardo Silva acres of space on the right, and his cutback duly found a clinical Sterling.

Then, following a ghastly miss, Aguero came up with something sublime, curling a screamer into the top corner from 25 yards out.

And the Argentine doubled his tally six minutes later thanks to a gift from Chelsea midfielder Ross Barkley. The Englishman headed the ball straight to Aguero, who became City’s all-time leading goalscorer in the league with a tidy, swivelled finish.

Gundogan completed 25 minutes of chaos with a decent strike from the edge of the box, although Kepa Arrizabalaga will be disappointed not to have done better.

Astonishingly, half an hour passed without a City goal, before Cesar Azpilicueta brought down Sterling in the box to allow Aguero to complete his hat-trick from the penalty spot.

And the Blues’ heaviest defeat in Premier League history was confirmed when Sterling rounded off yet another free-flowing City move with ten minutes still remaining.

As for the title race, City move back to within two points of the Reds with a performance to send shivers down Liverpool spines.