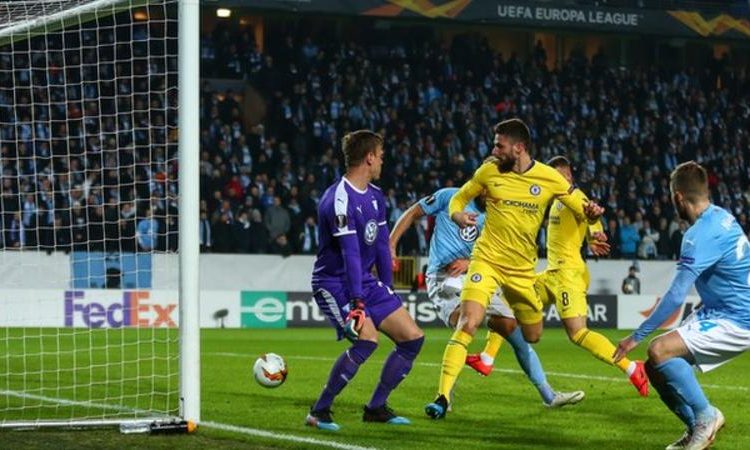 Chelsea claimed a narrow victory over Malmo in the Europa League after they were greeted with a rousing atmosphere in Sweden for the first leg of their last 32 tie.

Ross Barkley poked in a curling cross from Pedro to score in the first half.

Olivier Giroud flicked in the second after Willian cut the ball back having beaten his opponent in the box.

Malmo ensured it was a nervy ending for Chelsea as Anders Christiansen slotted home in the 80th minute.

Victory eases the pressure slightly on manager Maurizio Sarri who said his “job was at risk” after Chelsea were thrashed 6-0 by Manchester City in the Premier League on Sunday.

Chelsea remain unbeaten in the Europa League this season before the second leg at Stamford Bridge on 21 February.

Sarri looked dejected on the sidelines as he watched Chelsea suffer their worst defeat in 28 years at Etihad Stadium.

It was their fourth loss in 10 games and meant they dropped down to sixth place in the Premier League – 15 points behind leaders Manchester City.

Victory was needed against a Malmo side who have qualified for the knockout stages of the Europa League for the first time.

There were signs of nervousness from Chelsea at the start of the match, Malmo winning two corners within the first minute and having a shot blocked by Jorginho in the box.

But the Blues became more comfortable as the game went on and when Giroud coolly doubled Chelsea’s lead to score his fifth goal in the competition this season, Sarri could be forgiven for breathing a sigh of relief.

Chelsea made hard work of it in the end, though. Malmo threatened to equalise in stoppage time but as Sarri had stated before kick-off, his side “need targets in the short term” and victory of any kind was just that.

Rosler also expected a response from Chelsea after their mauling by his former club Manchester City, saying: “When a grizzly bear is wounded he’s a very, very dangerous animal.”

Sarri’s side were certainly wounded but they were made to battle for their victory after Christiansen’s late goal lifted the hostile atmosphere in Sweden for the last 10 minutes of the match.

David Luiz had earlier deflected away midfielder Arnor Ingvi Traustason’s half-volley and Barkley was forced to make two headed clearances to deny Soren Rieks in the first half.

The hosts – who were encouraged by their fans to press and hassle the Chelsea back four – seemed to tire in the second half which was not surprising given this was their first competitive fixture since December.

But they regained a bit of spark at the end after Chelsea had missed opportunities to extend their lead. Barkley had a close-range effort tipped over the bar by goalkeeper Johan Dahlin before Pedro’s curling effort was deflected narrowly wide.