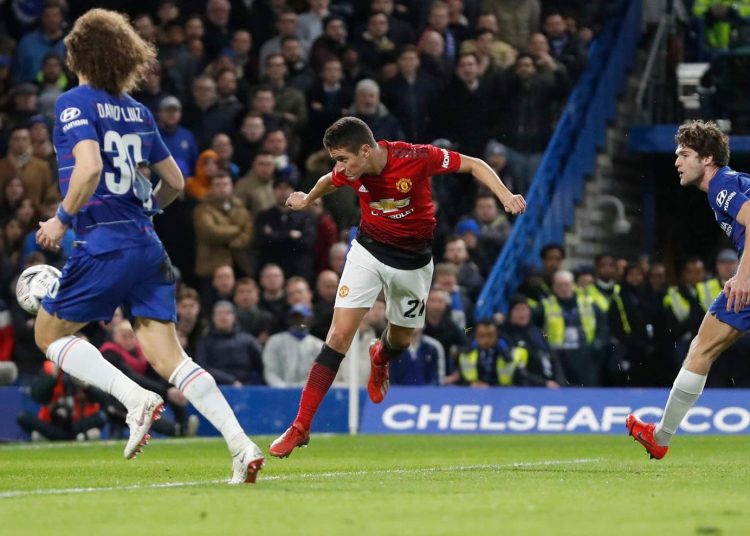 The result throws Sarri’s reign deeper into crisis, while United delivered the perfect response to their first defeat under Ole Gunnar Solskjaer to set up a last-eight tie against Wolves.

Ander Herrera converted Paul Pogba’s perfect cross to give United a 31st-minute lead, and Pogba doubled the advantage right on half-time when he dived to head Marcus Rashford’s delivery past Kepa Arrizabalaga, who should have done better.

As Chelsea slumped tamely to another damaging defeat, their fans turned on Sarri. They jeered his substitutions, mocked his ‘Sarri-ball’ philosophy, demanded the return of Frank Lampard as manager, and joined United’s fans in chants of “you’re getting sacked in the morning”.

“We played confused football in the second half but in the first half we played well,” said Sarri.

“I’m worried about the result but not about the fans’ reaction because I understand the situation. I can understand our fans because the result wasn’t really good and we are out of the FA Cup.

“I was really worried when I was in League Two in Italy, not now.”

Solskjaer had no such problems as he took the loud acclaim of United’s supporters after adding another impressive victory to his collection, despite the absence of the injured Jesse Lingard and Anthony Martial.

The club’s fans, who loudly sang the Norwegian’s name, may not have the casting vote when the decision on the next manager is made, but they made their feelings about Solskjaer clear on another important night for the man who hopes to succeed Jose Mourinho on a permanent basis.

Solskjaer has been presented with a series of key examinations since returning to Old Trafford after the sacking of Mourinho in mid-December.

One of his most crucial was how he would respond to his first serious setback – and how he would get his players to respond.

That setback duly arrived when United were well beaten by Paris St-Germain in the first leg of the Champions League last-16 tie at Old Trafford, a 2-0 scoreline flattering a team who had given Solskjaer 10 wins and a draw from his previous 11 games.

The response, here at Stamford Bridge, was top class and represented another plus point for the Norwegian as he tries to build a body of evidence that will persuade executive vice-chairman Ed Woodward and United’s hierarchy to give him the job full-time.

Solskjaer was stripped of Lingard and Martial but still produced a positive gameplan based around aggression, the drive of Pogba and the pace of Rashford.

It enabled United to overcome their second tough test in the capital after winning at Arsenal in the fourth round, and kept Solskjaer right in the hunt for silverware.

Sarri losing popular vote
Sarri’s stock was high in the early weeks of the season as Chelsea kept pace with Manchester City and Liverpool, and optimism was in the air as the Italian made a good first impression in English football.

But as time ticked away here, Sarri felt the full force of Stamford Bridge’s anger and disdain, frustration growing at the continuing decline in Chelsea’s performances.

There was awkwardness in the air as his by now customary substitution of Mateo Kovacic with Ross Barkley was met with sarcastic applause before a four-letter verdict was delivered on the much-vaunted ‘Sarri-ball’ that was meant to bring entertainment and results to Chelsea.

There were even calls for the return of Lampard, taking his first steps in management at Derby County, as Sarri cut a solitary figure.

It was a night when patience snapped, the tide of opinion turned, and Sarri was given noisy confirmation he is losing the battle for hearts and minds at Stamford Bridge.

Chelsea were limp and uninspired, and Sarri – who arrived with a stellar reputation after his work with Napoli – looked at a loss as to what to do.

The Blues face Manchester City in the Carabao Cup final on Sunday, and while it would be a bold decision for the club to sack him just days before that, it is hard to see Sarri surviving much longer as this was another grim 90 minutes.