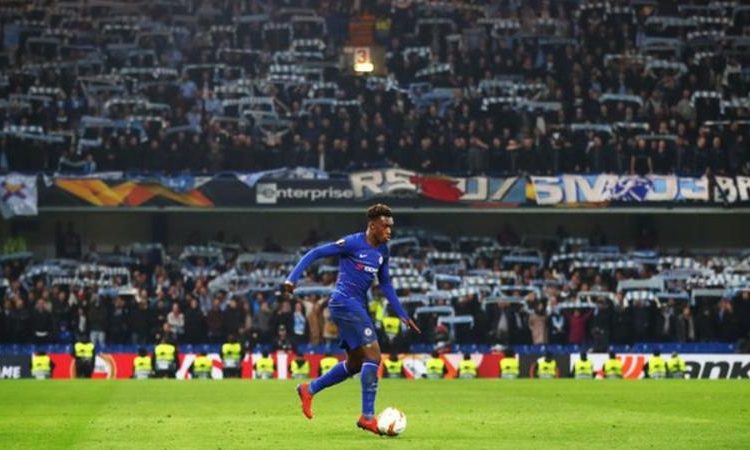 allum Hudson-Odoi has scored three goals in his last six starts for Chelsea in all competitions (Image credit: Getty Images)

Callum Hudson-Odoi scored a marvellous second-half goal as Chelsea cruised into the Europa League last 16 with victory over Malmo at Stamford Bridge.

The Blues, who led 2-1 from the first leg, started slowly but improved markedly after the break.

Olivier Giroud gave them the lead on the night by tapping home, before Ross Barkley floated in a free-kick moments after Rasmus Bengtsson was sent off.

Hudson-Odoi, 18, then drove in from the right before firing in a late third.

Whether this result will ease the pressure on Blues manager Maurizio Sarri remains to be seen.

Their next two matches – against Manchester City in Sunday’s Carabao Cup final, and Tottenham in the Premier League next week – will be bigger tests.

Arsenal powered into the last 16 of the Europa League with a comfortable second-leg victory over Bate Borisov at Emirates Stadium.

Trailing 1-0 from the first leg, they scored inside four minutes when Pierre-Emerick Aubameyang’s cross was turned in by Bate defender Zakhar Volkov.

Centre-back Shkodran Mustafi made it 2-0 before the break with a powerful header following Granit Xhaka’s corner.

Substitute Sokratis Papastathopoulos headed in the third goal after an hour.

After a disappointing performance in losing the first leg in Belarus, Arsenal needed to score at least twice to go through.

Bate were denied an equaliser just four minutes after Arsenal had taken the lead, when Stephan Lichtsteiner slid in to make a goalline clearance from Stanislav Dragun’s header.

The visitors also went close when Maksim Skavysh hit the side-netting in the first half, but Arsenal had better chances through Alex Iwobi, Xhaka and Aubameyang.