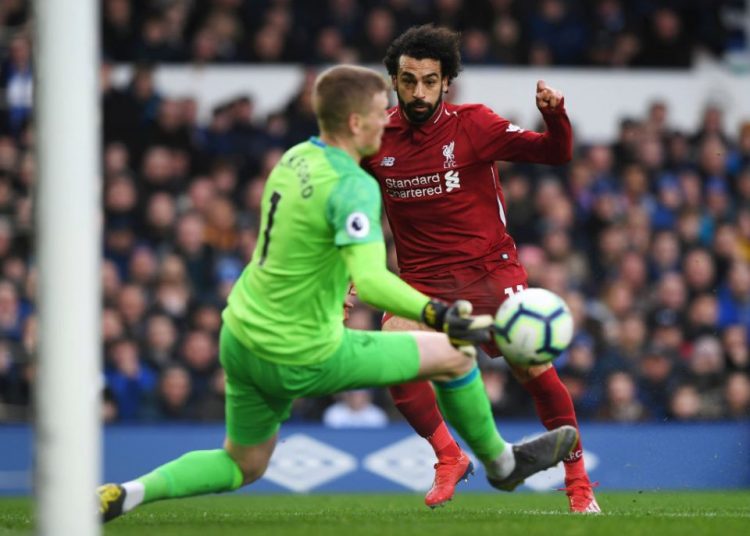 Liverpool were unable to regain their spot at the top of the Premier League after only managing a goalless draw at Everton in the 233rd Merseyside derby.

The Reds were guilty of missing a number of big chances, with Mohamed Salah missing two huge chances, while Fabinho missed a sitter in the second-half.

And, while the Toffees’ wait for a win in his fixture was stretched to 17 matches, Blues fans took great delight in putting a significant dent in their rivals’ hopes of ending a 29-year wait for a title.

Jurgen Klopp’s side now trail City by a point with nine matches remaining.

It was a typical derby encounter and Everton contributed hugely to that as, despite just six wins in 14 home league matches, they took the game to their opponents.

Dominic Calvert-Lewin gave Virgil Van Dijk plenty to think about with his harrying and harassing and although it occupied the Holland international he remained the calmest man on the pitch.

Similarly Bernard, preferred to Richarlison on the left wing, posed plenty of questions of full-back Trent Alexander-Arnold, although Salah was even more of a problem for Lucas Digne without actually being dangerous.

The one chance Salah, still looking for his 50th league goal for the club, was presented to him when Morgan Schneiderlin got caught out of position in central midfield and Fabinho slipped through a pass, but the Egypt international narrowed the angle too much and Jordan Pickford pulled off a good save.

Everton’s best chance came when Theo Walcott broke down the right but he blazed wide under pressure from Andrew Robertson.

Salah wasted another chance 10 minutes into the second half when put through thanks to Joel Matip’s weaving run but the Egyptian delayed and Michael Keane got back to block.

The first substitution was Everton’s on the hour with Richarlison replacing Walcott, a sign Marco Silva sensed the game was still there to be won.

Klopp responded with a double-change of Firmino and James Milner, with the former creating a headed chance for Mane within a minute of coming on.

Digne produced a goal-saving interception to prevent Fabinho converting Van Dijk’s knockdown while a sliding Bernard failed to connect with Richarlison’s cross on the break.

Liverpool were winning the midfield battle but Everton were defensively resolute, although Matip skewing a header wide contributed to their efforts.

A fourth draw in six matches is turning a stutter into more of a stumble for Liverpool and will require significant remedial action if they are not to see City, with nine wins in their last 10, disappear into the distance.