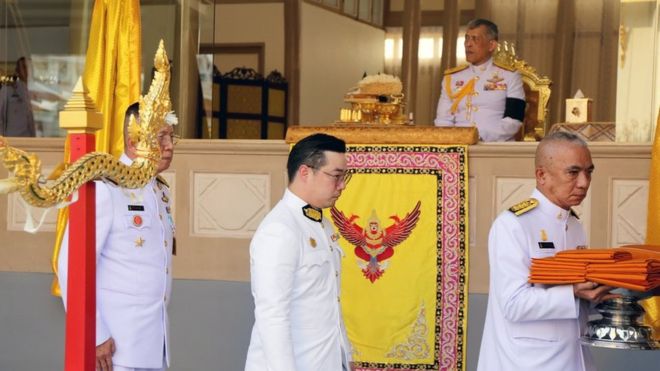 The Leicester City chairman who died in a helicopter crash has been honoured with a royal cremation in his native Thailand.

Vichai Srivaddhanaprabha died along with four others when the helicopter crashed after taking off from the club’s stadium on 27 October.

King Maha Vajiralongkorn presided over the ceremony in Bangkok on Thursday.

New Leicester manager Brendan Rodgers and striker Jamie Vardy were among those who attended the cremation.

Leicester City players who were not involved with fixtures being played during the current international break travelled to Asia, with former England striker Jamie Vardy and club captain Wes Morgan among the attendees.

Brendan Rodgers – who was appointed Leicester manager last month after the club fired Claude Puel – was also at the ceremony at Wat Debsirindrawas Ratchaworawiharn Temple.

A funeral for Mr Vichai, which was also attended by the squad, was held at a temple in Bangkok in November.

A memorial for Mr Swaffer and Ms Lechowicz took place at Guildford Cathedral in December.

The Air Accidents Investigation Branch (AAIB) is conducting a probe into the cause of the crash.

In December, an AAIB report found cockpit pedals had disconnected from the tail rotor of the helicopter, leading the aircraft to spin out of control and crash.

An inquest into the death of the five people on board has been opened and adjourned.